Why we hike, why we fish

"I’ve put a lot of miles on my legs, hiked into barren lakes, been rained / snowed on, post holed in waist deep snow, trudged through marsh & mud, slept in the dirt, been lost, bushwhacked for hours, missed work, and put thousands of miles on my truck…the rewards of the high country are pretty sweet!" – Mike Garcia 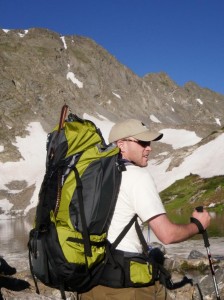 I am not sure what else to say about this particular day hike that Mike and I did. I am half tempted to just put a picture up and call it a day. They say a picture is worth a thousand words and in this case it might be two thousand. As you have read in previous posts, I have hiked and fished a lot over the past few months and sometimes not doing so much catching. But it isn’t always about the fish, until it is.

This trip was like the rest, head up to the trailhead on Friday night, throw back a couple Fat Tires, crash out for a few hours and then up at the crack of dawn to start hiking – getting to the lake at the normal time, 8:30 in the morning. The timing of this particular hike turned out to be just about perfect. It was spawning season. That means that the fish are extremely active in the inlets and outlets of the lake, unfortunately they only have one thing on their mind and it is sometimes difficult to get them to bite.

Mike and I headed to the outlet and couldn’t believe all of the fish we saw. They were stacked up in a little section of water no more than two feet deep, all jockeying for position and trying to finish their spawning rituals. This was the perfect time to get some video footage of these cutthroat trout, up-close and personal.

Excited about all of the activity, we took our packs off and started to rig up. Not sure why it took me so long, but Mike was already in the water before I even had my waders on. I hear him say something about a big trout cruising and then…fish on! I scrambled to grab my net and camera and get in the water to help Mike out. He was telling me “it is big!” and telling himself not to lose it. I can attest that it is sometimes quite easy to hook a fish that can just as easily to get unhooked. On this day, Mike’s wasn’t going to get unhooked.

As I hurried out to meet Mike, he scooped the beast of a cutthroat up in to his net. Well, halfway in to the net. As I approached, I finally was able to see just how big this trout was. The tail was sticking out of the net as Mike walked over to unhook his trout of a lifetime. With hands shaking, and the trout trying to get free, Mike said in a shaky voice “This is the biggest fish I have ever caught!”

After the pictures were taken and the fly was removed, the fish was back in the water. I was excited for Mike, but of course I needed to have my own fun as well. So a little more than two minutes later I was hooked up. Granted, the fish wasn’t nearly as big as Mike’s but it didn’t matter, it was in my net and it was a fantastic 18” cutthroat trout. 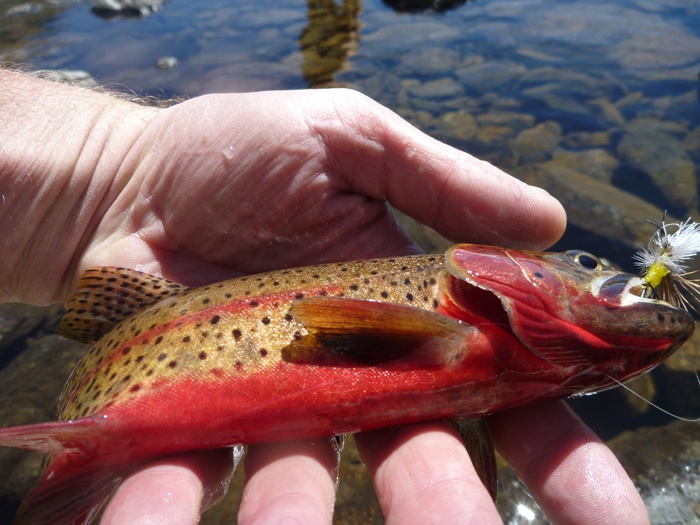 No bite, no bump

Then about an hour later, it turned off. Not a bite or a bump. We could still see all of the fish cruising, but they weren’t interested. We decided to try the other side of the lake, to no avail. So we packed our things and headed to another lake that we passed on the way up. The fish were spawning there as well, although much smaller in size, but the colors were so vibrant that the size really didn’t matter.

At the end of the day, nine fish were caught with one of them being the monster Mike has been fishing for all these years. All were tricked into taking flies that Mike and I had tied up ourselves, making the day that much sweeter.

And that is why we hike.

Enough with the snow already Colorado! Ok, I take that back. We need all the snow we can get this...
Read More

5 days in the Adirondacks with the Aircontact 60+10 SL

When There's No Such Thing As Too Much Paracord, You Can't Go Counting Ounces

Deaken Boggs, aka Dooter Man, is the winning guest contributor for April and proud new owner of an ...
Read More