The Grand Gulch Experiment: A Family Hike Without Llamas

Investigating the ancient history of the desert Southwest can be mind blowing, but exploring it with a seven-year-old adds a whole other dimension of wonder.

For families who are intimidated by the thought of undertaking a multi-day self-supported backpacking trip with kids, Grand Gulch, Utah, is a great playground for that first backcountry foray. The canyons are generally flat and dry (you rely on springs and potholes that collect rainwater), and we camped on slick rock. 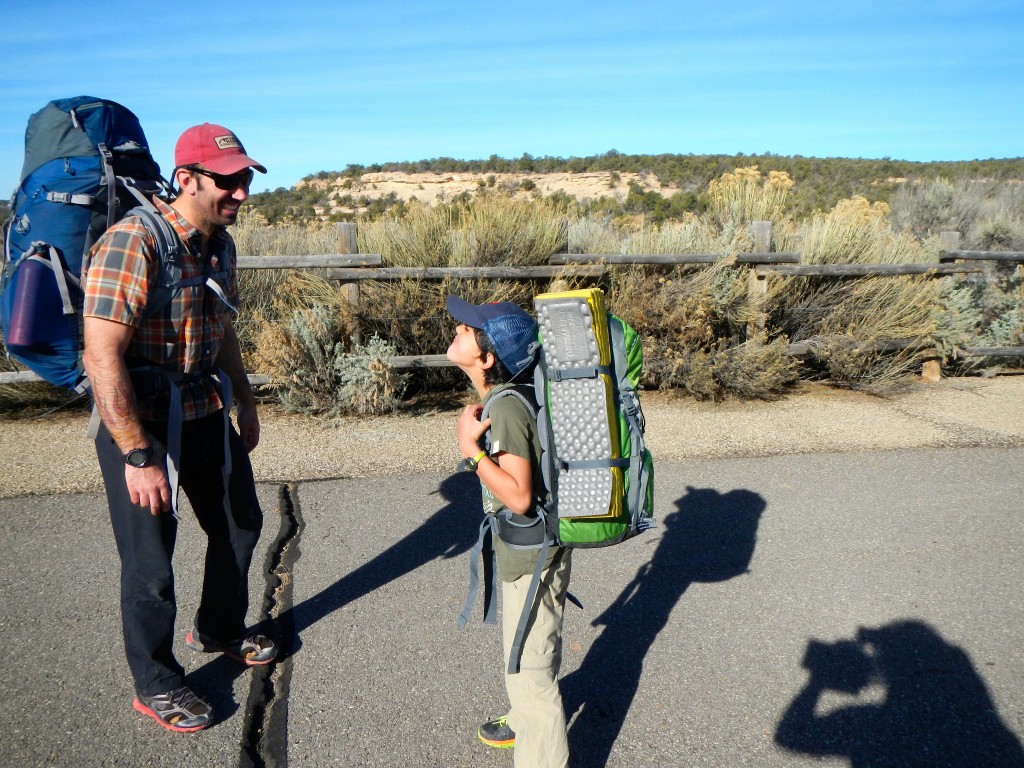 Along with the amenable terrain, the thing that makes Grand Gulch most appealing to imaginations young and old is the chance to explore the ruins of the Ancestral Puebloan people (sometimes referred to as Anasazi) who inhabited these canyons hundreds to thousands of years ago. 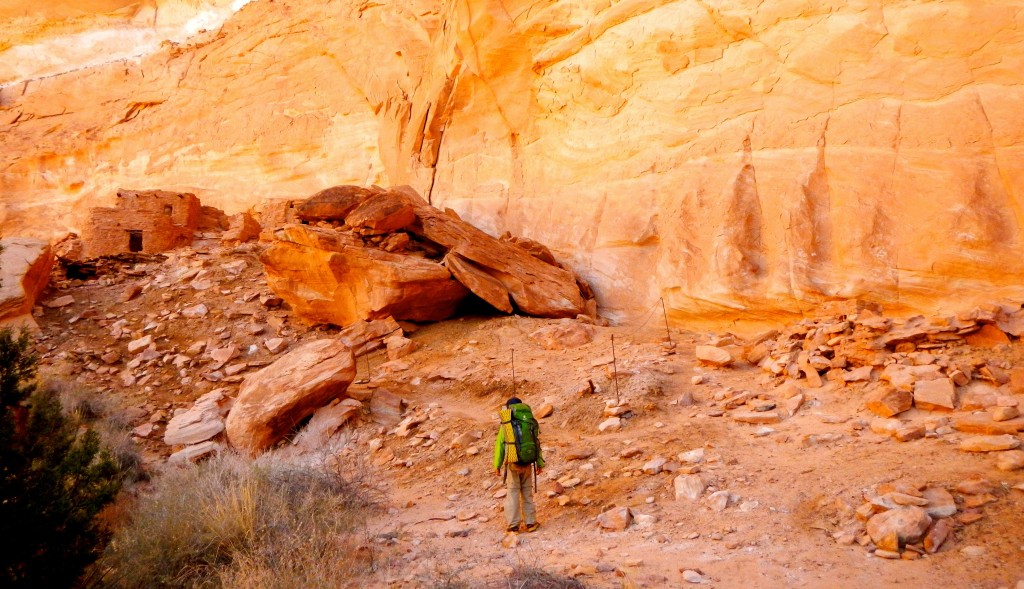 We visited at least two ruins a day, and those that weren’t named on our map were given names by our son: “Pot Sharderie Ruin,” “Secret Agent Ruin,” “Hidden Ruin,” “Grainery Palace,” “Secret Site,” “Sand Dunes Ruin.” In the heat of midday, we sat in these cool alcoves beneath overhanging sandstone ceilings, alcoves that were once teeming with daily family life. And as we stared at the petroglyphs and pictographs on the walls we would imagine what kids like Kieran were doing a thousand years ago. Were they playing on rocks? Did they hunt with their families? What did their paintings mean?

This was our first family backpacking trip sans llamas. While this might not be a big deal to most people, to us it was HUGE. After three years of llama support, we just couldn’t picture traveling without the Eeyore-like musical accompaniment of braying llamas. Not to mention they carried most of our gear. 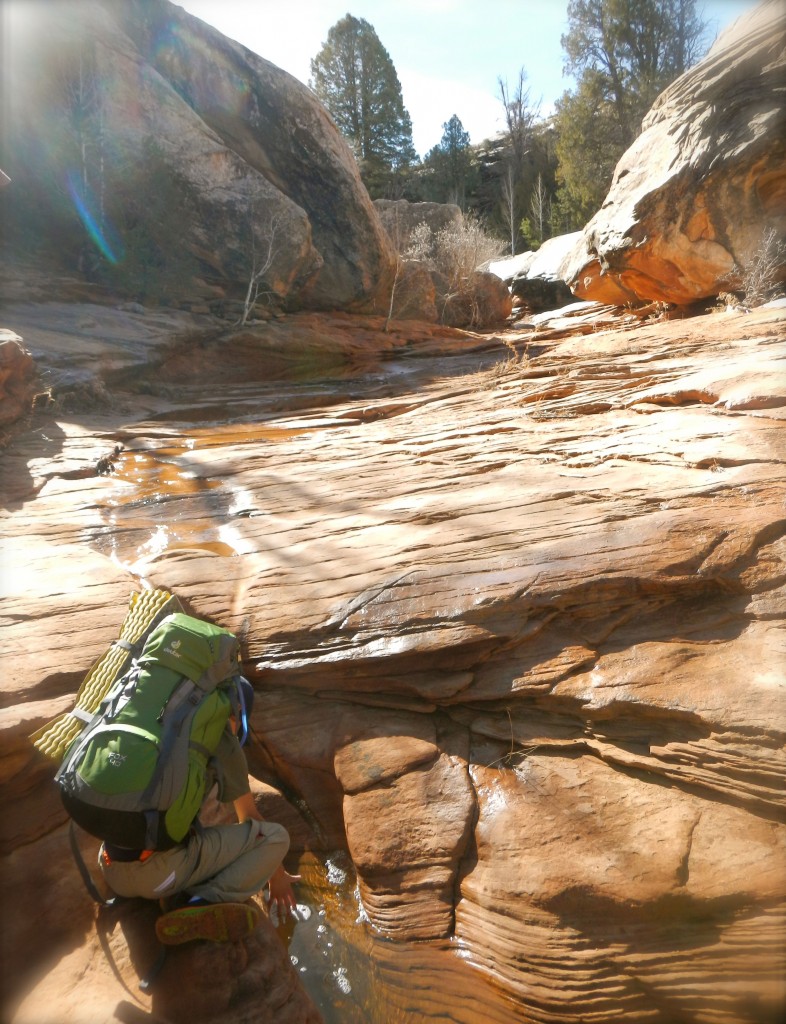 Traveling without llamas meant we needed new packs to hold cooking gear, fuel, rations, our tent, and every else that we had historically foisted on our four-legged friends. I decided to use the Deuter Futura Vario 55 + 10 SL, my husband Jamie used the ACT Lite 75+10, and our now seven-year-old son Kieran used his new Fox 40 (a step up from his Fox 30).

We proceeded to fully load Kieran’sFox 40 backpack to about a third of his body weight – 20 pounds. He carried all of his personal gear, including his bowl, water, sleeping pad and bag, plus some snacks for the day.

Starting our trip at the Kane Gulch Ranger station, we made a 30-mile circuit through Kane Gulch, then headed south at Grand Gulch until we exited at Bullet Canyon.

We averaged six miles a day, which included hiking a few miles with packs to our camp, and then making side trips during and after our hikes to visit the ruins. On our last night, in a fit of creative inspiration, Kieran erected a diorama of an Anasazi ruin, a tiny version of the life-sized dwellings and kivas that we had been visiting for the past week. 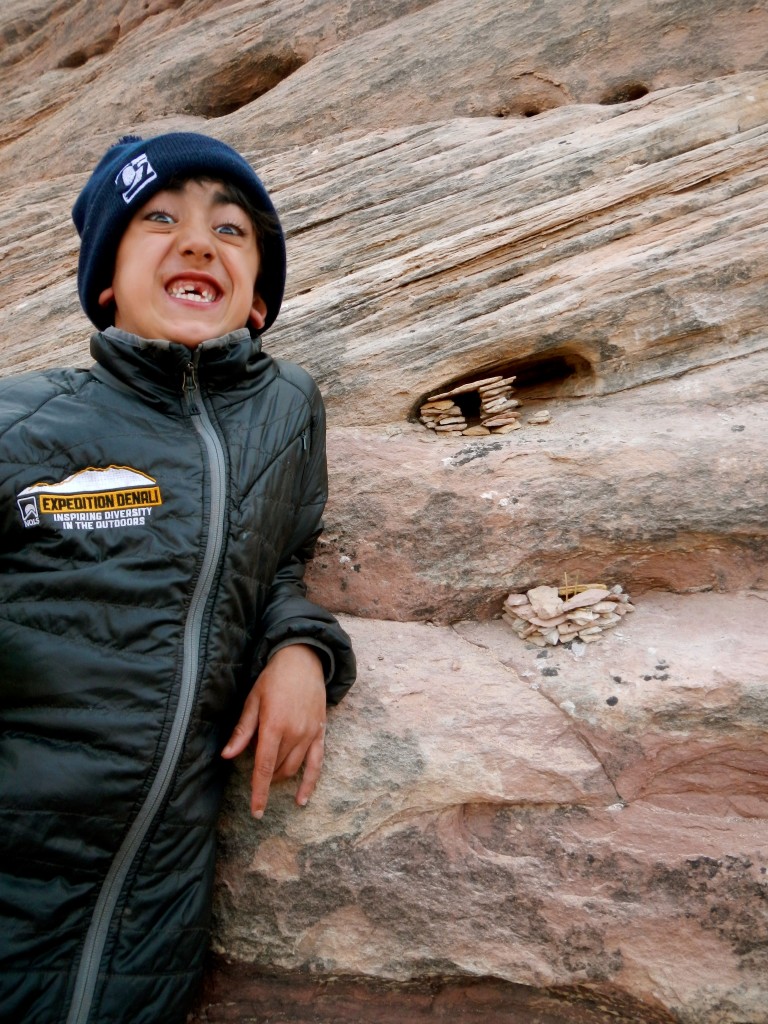 And even with what I thought were conservative estimates of rations we would need, we exited Bullet Canyon with enough food to feed a family for three more days and enough great memories to hopefully bring Kieran back when he’s older.

Spring is best in the canyons, so grab your packs and head south now!

Gear that Grows with Kids

Deuter has long been a company that prides itself on not only catering to the hard core mountain...
Read More

How to Choose the Best Mountaineering Guide Service

Want to be guided into the mountains? Ask these questions and follow these tips to help make it the...
Read More

Gear that Grows with Your Kids

As a parent of two young boys, I am constantly amazed at how quickly they grow. There are literally...
Read More