I owe Nick White one of my best friends for being the first to take the plunge into marriage. It was this marriage and his location choice, a castle in France, that provided me with the excuse to save money and make my way to Europe, a place previously overshadowed by U.S. and South American adventures.

The trip began in a style much my own. After waiting with my dog for my brother to show,  I realized I was out of time and would have to take the bus.  This change in plans resulted in me running down the street with all my gear like a mad man.  Strewn about myself, I had three packs for this adventure: my Speed lite 20 for climbing, my Guide 45+ for climbing gear, and my Air Contact Pro 70 +15 for clothes, camping gear, kitchen and everything else. 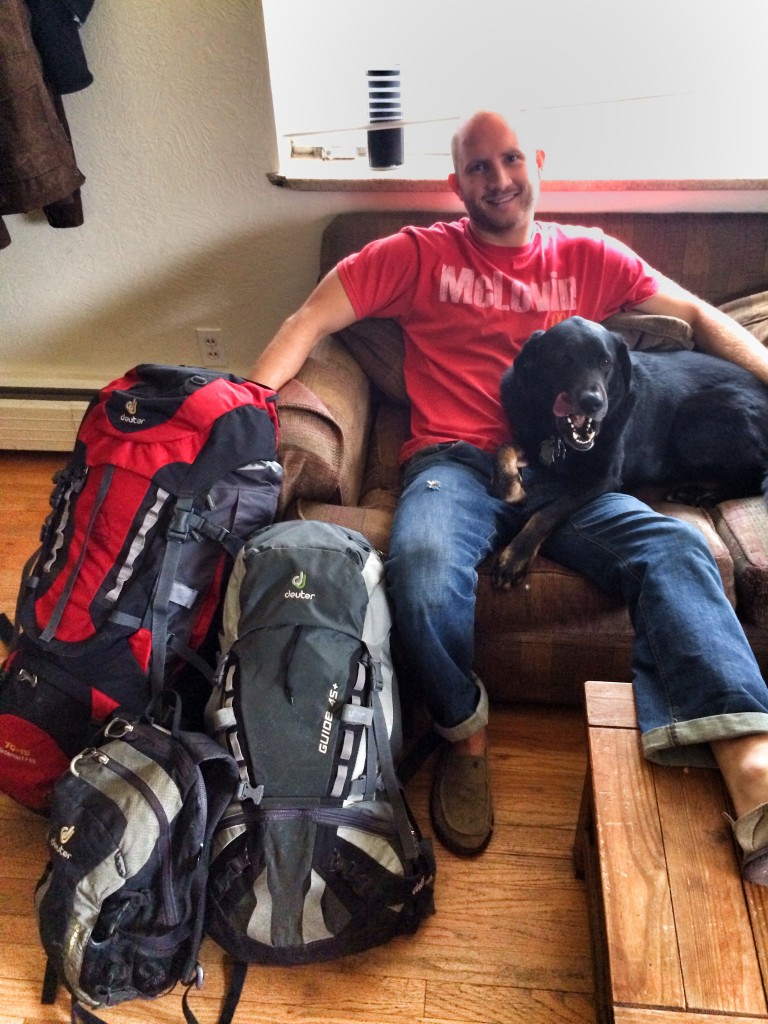 At last, I showed up to the airport where I quickly found out my passport had expired!!! If I had a problem embarrassing myself or making a scene in public the trip would have been over at this point. Luckily with serious groveling, some crying, and requests that my arms be cut off, I was able to convince the gate folks to give me a staff seat on a flight the following day. Then all I had to do was get to the passport office in 2 hrs. I arrived by taxi with a full 15 minutes to spare. A few hundred dollars and 24 hrs later I was on a flight to Amsterdam!!!!

Amsterdam was Amsterdam! AWESOME! We proceeded to have a weeklong bachelor party, IN AMSTERDAM!

After we all flew to Bordeaux, France for the actual wedding which took place in a Castle that housed all the guests.

It was one baller wedding, standard for me! 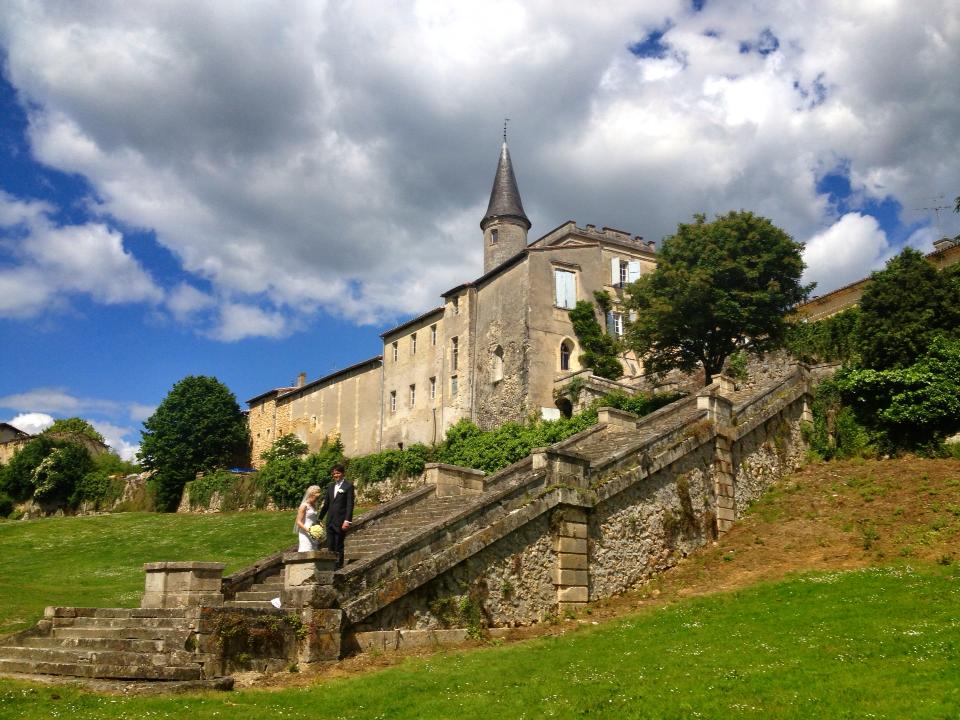 The Wedding was great but this is a climbing blog post so let us get to that. After the wedding I hitched to my final destination, Canyon de Verdon!  Hitching proved to be pretty easy, took one day, about 11 rides but not much waiting overall. 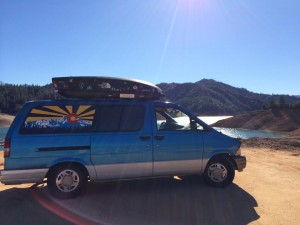 When I arrived in Verdon it was raining but still light out (sun didn’t set till 11pm). I had a lot to do before I could get climbing. I had to find a partner (preferably a female French climber with a van), set up camp, and get the lay of the land (which means figure out how to live on the cheap).

I headed over to the “climber” camp. As I approached I saw a lone guy huddled by the fire in the kitchen area trying to warm up. As I approached he looked up and simultaneously we said, “need a partner?” YESSSSS!!!!!! We literally both jumped in the air, high-fived, hugged and began to plan the next days climb! GAME ON!

Ben, is an awesome Canadian dude who moved to Columbia years ago. He’s a chiropractor and a nutritionist! (Chiropractor = daily adjustments for me!) He was a stronger climber than me overall but he also had a case of pneumonia so I think that made us about equal.

That evening we met a French guy who wanted to do a 10 pitch 5.10+ trad climb the following day. It was not a recommended climb plus we had not climbed in the area and so it wasn’t much of a warm up, but he was super stoked on it, knew the area, and so we agreed.

The hike in was great. The canyon was huge, with steep walls all around us and water flowing through it as blue as what you see in the Caribbean, really spectacular. 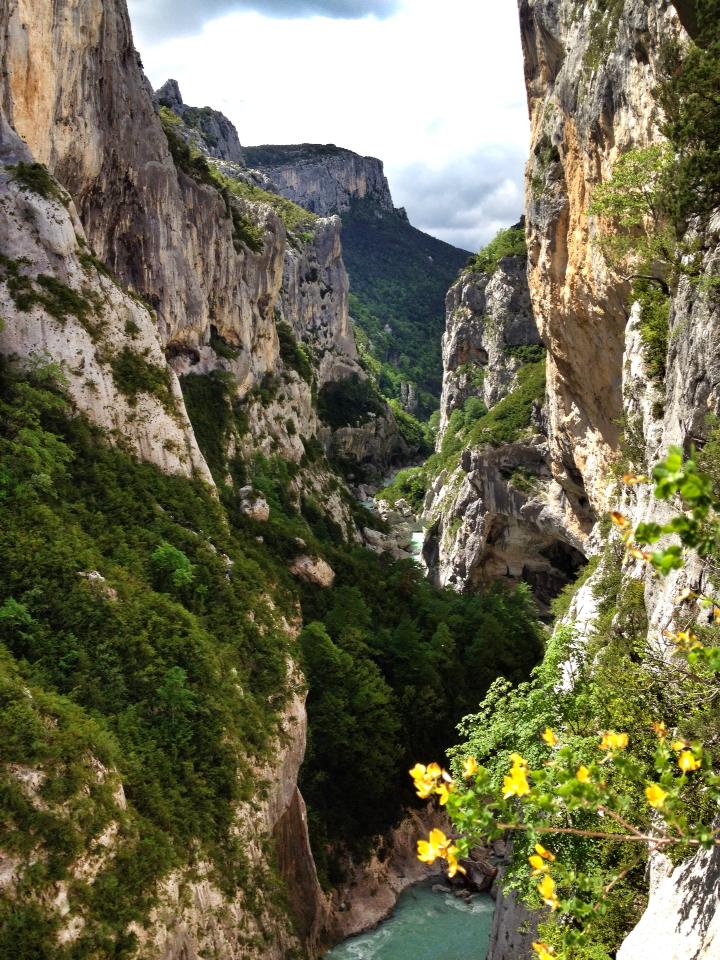 Then the climbing started and things got kinda hectic. Ended up being super-duper chossy, scary belays, and on the third pitch we found out after some very questionable placements that it was our French friend’s first trad climb, pitch, route ever. Now we were both concerned. As Ben took off from the third anchor, a long, steep, sustained and dirty 10+ he looked back and me and suggested that I don’t fall! Pitches went like that for the next 5 hours. It rained a bit, was scary, and by the end we just wanted off! But we made it to the top, celebrated, and headed back to camp for wine and dinner. We didn’t climb with that Frenchmen again.

The rest of the trip went a lot smoother. We crushed typical Verdon lines daily which means approximately 1000’ steep sustained bolted lines. We stuck mostly in the 5.9-5.10+ range with a couple 11s. 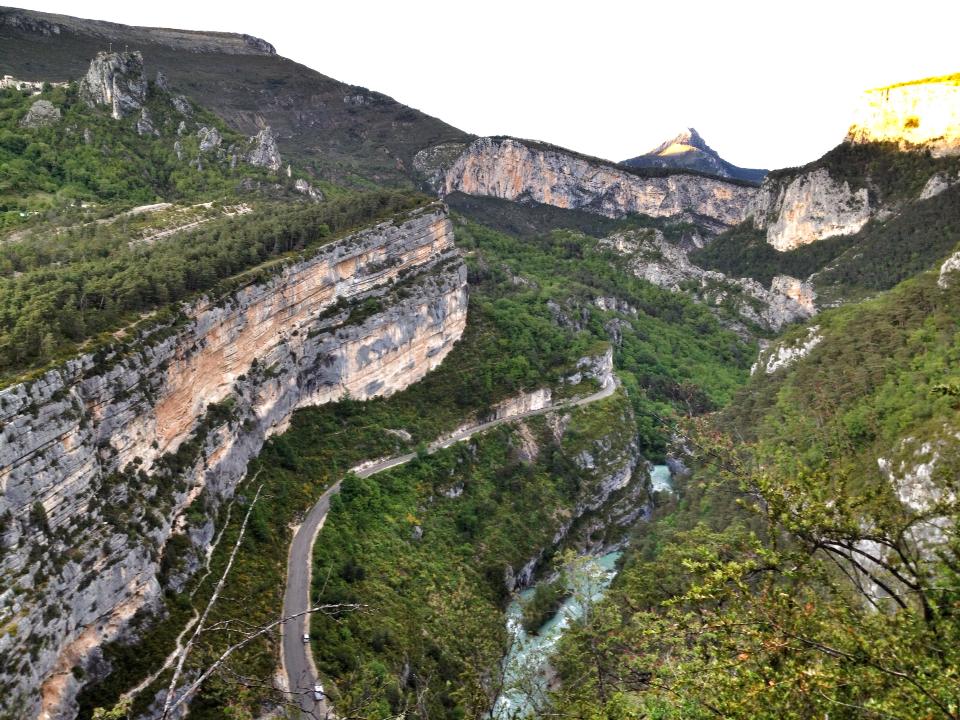 Climbing with good weather and only a rack of draws was so light and free. So different when you gear up for 1000’ feet of climbing and your rack is 20 draws. A very clean style.

The rock was unlike anything I’ve been on before. I’ve tried to describe it not very effectively to friends but here I can just show you a picture: 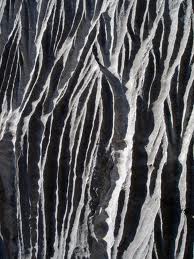 It took a week to get used to because these thin ridges felt brittle, but they are not and once you get used to them, you start to really enjoy climbing on them.

The community at the climber camp was great and over the weeks we formed a group of friends changing up partners regularly while returning to our regular on most days (Ben being MINE!).

The camp is run by a fairly crazy older guy who has lived there his whole life and is great. Super sweet guy. The view from camp is great: 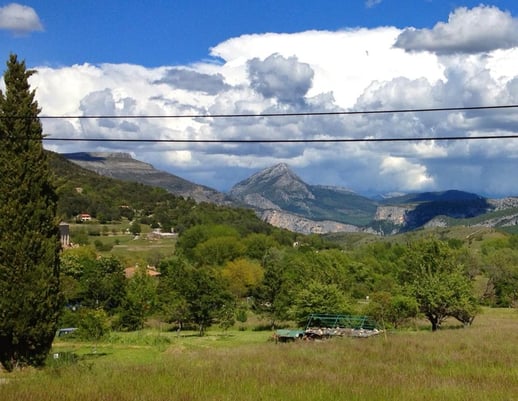 In addition to Ben there was an early 50s y/o couple from Austria who ran a ski guiding company and had been climbing in Verdon since, well forever… They rocked, so much, smoked like chimneys, crushed at slack lining and hade a 400 foot static line if you wanted to top rope solo with some tunes.

I ended up meeting my single French girl with a van but couldn’t get my opportunity as I wasn’t the only guy who knew what was up. But she may be reading this and if so…. NEXT TIME!!

So first thing I want to do is give a list of my favorites that are so cheap.

Because it was light we rarely finished in the dark and were home in time to eat massive wheels of brie cheese and jars of pate and jam. Well at least that was what I ate. I guess its not custom but I highly recommend a baguette with a super thick pate base and an equally thick brie layer!!!! OMG! SO good, and a huge mug of wine.

Also there was a great bakery in town with a young, beautiful, amazing, French girl. She was in love with me. We had long conversations that were mostly laughter and long looks as neither of spoke a word of the others language but all the same…Next time!!!!

I’m now wrapping this post up from Joshua Tree CA, by way of Washington, Oregon, and soon Indian Creek before I head back to Boulder for Thanksgiving. That being said I have some great experiences from these last three months on the road in the USA! Till then, have fun, MWA!

Celebrate marriage, climbing and cheese with your next Deuter pack

There are some 4 letter words that are off-limits when children are around.  Instead of using the...
Read More

A private permit to raft the Grand Canyon for sixteen days.  Sixteen of the most adventurous people...
Read More