Six Things You Might Not Know About Hiking Cannon Beach

My philosophy can be summed up as, "Going new places is fun." Like going to Cannon Beach on the Oregon coast. Technically, it's not new since I was there in high school, but since that was approximately a million years ago it hardly counts. Oops, I left part of my philosophy unwritten. "Going new places and hiking there is fun."

So yeah, we went to the beach and then we went hiking. Don't blame me. I'm contractually obligated to go hiking. That's the price of being a Deuter Ambassador. (Deuter provided these packs to us as part of our diplomatic relationship.)

On this trip we were trying out the Deuter Climber and Guide 35+.

The Climber is intended to be a daypack for the kids. It's compact, light and has a 22-liter volume. The Guide 35+ is my new daypack. Although this hike wasn't terribly short to test the Climber (about four miles and 850 feet of gain) it was a little light for a proper test of the Guide pack. Nonetheless, this would be a good shakedown test.

First off, just to get everyone on the same Vibram-soled foot, beaches in the Northwest aren't what the rest of you probably think about beaches. The water is brutally cold, and instead of sunbathers there's people flying kites and looking in tide pools.

We parked at Ecola State Park at the Indian Beach trailhead, so here's tip number two: Get there early. The lot was full at 9 a.m., and cars were backing up waiting their turn to get in.

National park nerd note number three: Ecola State Park is part of the Lewis and Clark National Historic Park. Captain Clark called Tillamook Head, "the steepest worst and highest mountain I ever ascended." Apparently he was big into hyperbole, but it was long ago so maybe mountains were harder to climb then.

We opted to climb up the ocean-side of the loop of the Clatsop Loop Trail and it was a great decision. We could look down on the sandy beaches broken by rocky heads and towering sea stacks. One of the biggest is Haystack Rock, but that's for later.

When we headed inland away from the cliff down to the beach we were faced with huge trees and that weird mix of usual Northwest flora (sallal, Oregon grape, sword ferns) and coastal trees (Sitka spruce). The biggest tree we saw was a monster we could easily have lived in, but only after we pruned the ferns and dense moss off it.

Tip number four: At the high point you'll find the Oregon Coast Trail Hiker's Camp. The Appalachian Trail-type cabins with bunks would be a great place to spend a nasty, rainy, windy night. Heck, there's even an outhouse.

Not satisfied, we trekked an extra quarter mile to a overlook of the water and the Tillamook Rock Light. (That's number five. Maybe you thought it was a "Lighthouse," like I did, but Wikipedia says nope.) It's really neat to look at, but it turns out you don't want to go there. Plus it's full of dead people. (Seriously.) 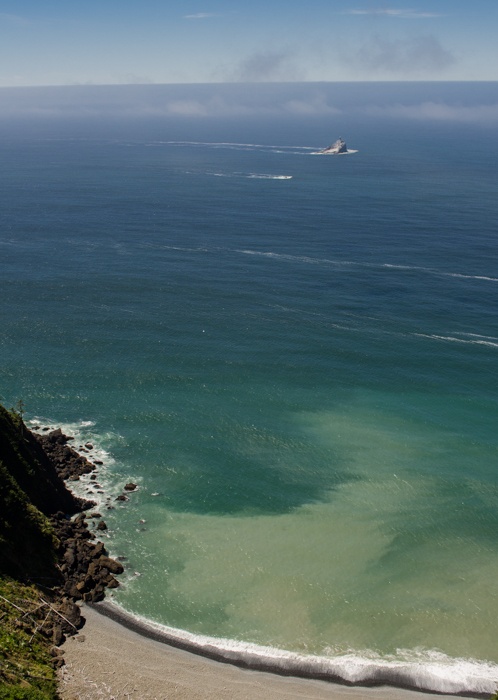 Our initial plan was to head back on the inland side of the loop, but we realized that was just a service road. Tip number six -- hiking the trail is better than the inland service road. Instead, we retraced our steps through the forest and along the bluff.

You might think this is where the story ends, but it's not. Up at the Hiker's Camp there was some clothes changing and bathing suits were secreted under hiking clothes. When we reached the beach it was like a superhero transformation minus the phone booth. Lilly and Henry went into the freezing cold water (hmmm... maybe I'm succumbing to the hyperbole) and even Amy went in to jump waves.

Since we had to get back to town and Henry could no longer feel his toes we traded our spot in the parking lot for the open road.

Both packs did well. The Climber is adjustable enough that we were able to lengthen the back so Amy could wear it a bit, too. Even though I didn't get a chance to stress the Guide much I know that will come. I just need to be patient and put up with a couple more trips to the beach 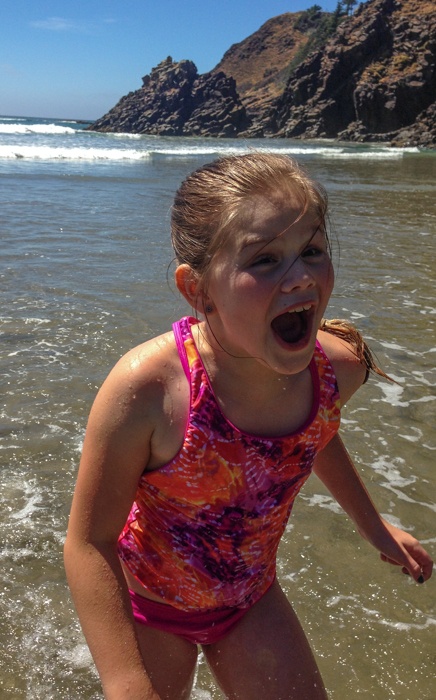 Joan Maguire is the winning guest contributor for July. After assisting in the daunting rescue of...
Read More

The Secrets to Packing for a Desert Adventure in Utah