Singing In The Rain With My Futura 22

I hate to rub it in, but I feel pretty comfortable saying “my job is better than your vacation.” I moved to Moab in 2006 for its mountain biking and to escape the big city. Fortunately, I am able to pay most of my bills by riding my bike. My Moab beginnings as a multi-day backcountry guide have now evolved into Rim Tours’ Day Tour Manager.

This season, I decided to do ride-alongs with each of my day tour guides, not because I have any concerns regarding their guiding skills, but because I wanted to see and hear all the great things they do with guests out on the trails. In sum, I get to pick and choose trails I want to get out on every once in while -- not a bad perk! This morning I chose to join a tour led by Brooks. Brooks sports the Trans Alpine 26L , and I use the Futura 22. Brooks is able to load his pack with his personal gear including water, tubes, pumps, medical kit, and jacket as well snacks and additional water bottles for the guests. I know Brooks chose this model pack because it had exactly the carrying capacity he was looking for and he thought he had a shorter torso than most guys. However, as the season has worn on, he is re-thinking his short torso theory and might be looking into the Trans Alpine 30 next.

The weather this morning started out questionably. Our answer came in the form of a light, steady rain, forcing the original trail ride to be scrapped. The family of four Brooks was to guide had just come off a Grand Canyon rafting trip where it rained on them nearly the whole time. They were great sports and after some encouragement from Brooks, they were game for the Slickrock Bike Trail Practice Loop. As it turned out, this trail was on the dad’s bucket list, so perhaps the rain was meant to be! Perhaps, while a rainy day may put a damper on riding or vacation plans, it sometimes is more about attitude and who you ride with. 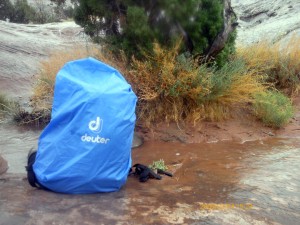 As always, I was stoked to have my Futura 22. Mine was filled with the same items as Brooks, sans the extra water bottles, and I still had room to spare. I use the big compartment for my bike repair gear and extra clothing. The smaller side pockets are great for easy access to snacks and my camera. The bright part of my day came when I had to use the pack’s built-in rain cover. The rain cover was very much appreciated as it protected everything in my pack. I liked that it covered my entire pack well and did not slip or slide as I rode.

Work or Vacation, Rain or Shine, the Futura 22 gets the job done!

Looking back on the cloudy, cool weather of early April, it sounds heavenly as temps reach 104...
Read More

I’m a little gun-shy about saying we’re out of the woods, but it just may be the case. Not only...
Read More

We are happy to have Kirstin Peterson on board as our newest Deuter Ambassador. Kirstin runs Rim...
Read More