So this is how grown ups travel?

It was January 2004 on the morning of my departure for a mountaineering trip to Ecuador. I slung two heavy duffel bags over my shoulders on my way out the door and ... a twist in the wrong direction, a shooting pain through my lower back.

How was I going to sit on a plane all day? Even more worrisome, how was I going to carry a pack and climb mountains? In the car I braced myself to prevent being jostled by the small bumps in the road -- It was not the carefree and hopeful ride to the airport that I'd expected.

Fortunately, I had a few days of travel, acclimatization and logistics planning before any real physical activity started and some muscle relaxers and pain killers got me through the muscle spasms of that first day, allowing me to recover. 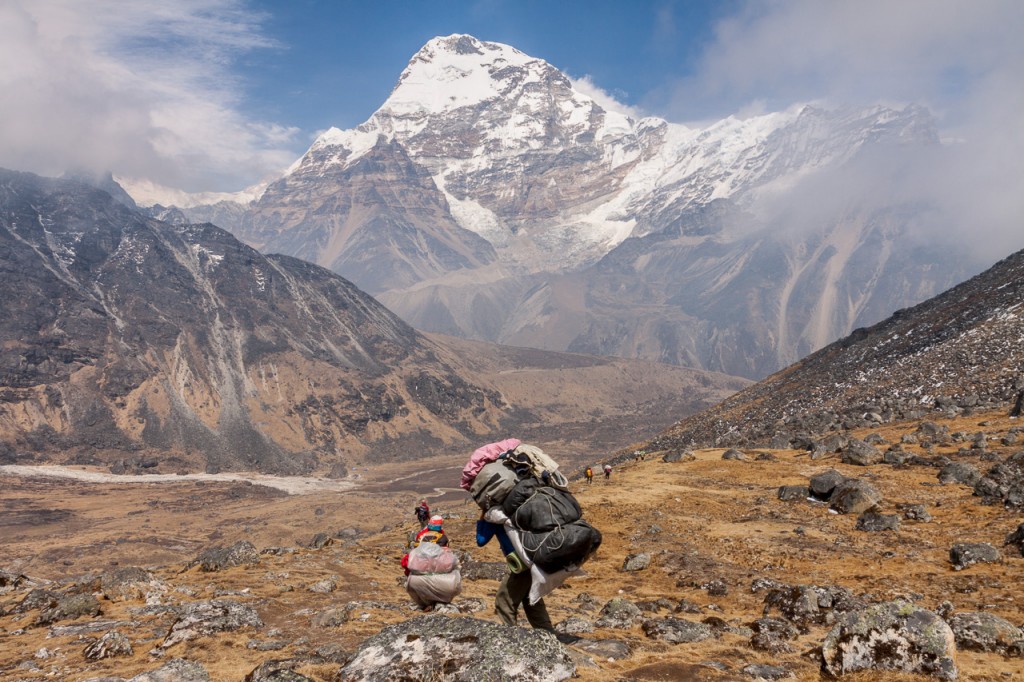 The “mailbag” being carried by a porter in Nepal.

I went on to climb several peaks on that trip, all the while shuttling bags from my back to buses to trucks. One of those bags went with me on nearly every trip I took for years, and I still use it occasionally. It has been carried by planes, boats, buses, pack animals, Land Cruisers and porters and has had its share of abuse. My well-traveled brother-in-law once remarked that it looked like a “mailbag.” I don't think he meant it as a compliment.

It may have been hard to imagine at the time, but there was always a possibility that someday I would “grow up” and trade the “mailbag” for a real piece of luggage- you know, the kind with wheels and a handle- with which I could just stroll through the airport, without buckling under a heavy load of gear on my back. As it turns out, I did grow up (sort of). I have two young kids and now when I travel, rather than carrying climbing or ski gear, I have carseats and bags full of kid gear to drag through the airport. 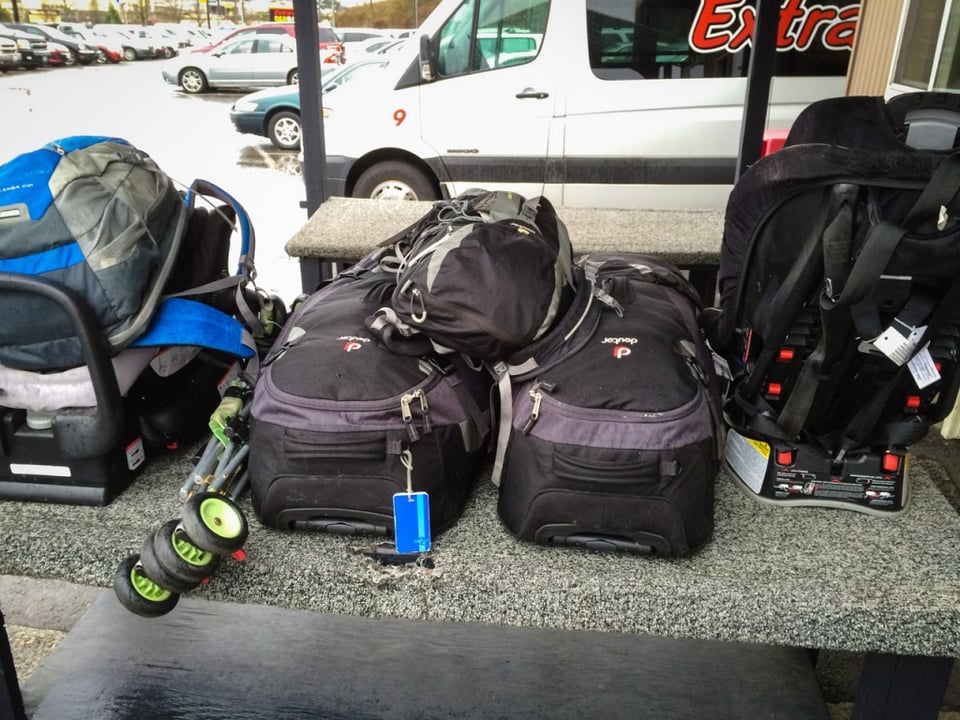 Go ahead and try hauling around this much gear plus two kids without wheels.

With two children under five, my wife and I are not only managing luggage for four but are often carrying or strolling one or both of our children while we navigate shuttles and airports. We have developed a system that is both comfortable and efficient. The key element to this system is a pair of Deuter wheeled duffels, the perfect piece of luggage for those who cannot let go of their dirtbag gear duffel past but want the comfort and convenience of wheels and a retractable handle.

Deuter offers three sizes of wheeled duffels, the Grant Flight carryon, the Helion 60 and Helion 80. When packing for family travel, I recommend the largest 80-liter size. We carry everything for four people in two large wheeled duffels. When the wheels are on the ground and the carseats are out of the car (walking through the airport, to shuttles, into and out of houses and hotels), each duffel has a carseat slung over its retractable handle.

With this setup I can wheel both duffels and car seats with minimal effort. Escalators and elevators can be a little bit tricky for managing two wheeled bags simultaneously, but it is much easier than if I were carrying all of that gear. Meanwhile, my wife carries our youngest (in the Deuter Kanga Kid backpack, which also serves as a diaper and snack bag -- Kanga has been replaced by the Kid Comfort series, which is even nicer) and strolls or walks with our oldest. I also carry a Deuter Speed lite or Pace series pack as a carry-on.

The Deuter wheeled duffels are like the Weeble Wobbles of the luggage world: “Weebles wobble but they don't fall down.” A solid base and back panel give the bags the necessary structure so that they want to stand up when they are not rolling. They really only wobble when I have heavy carseats lashed around the retractable handles and even then they are remarkably stable for carrying such an unbalanced load.

We briefly tried a wheeled duffel from another prominent outdoor company, and that bag rarely would stand on its own even without a car seat on it. The Deuter duffels have sturdy grab handles on all sides for easy loading, unloading and lifting over obstacles. A large, durable zipper on the main compartment opens wide for easy access, and the bags hold their shape, which simplifies packing and finding items. 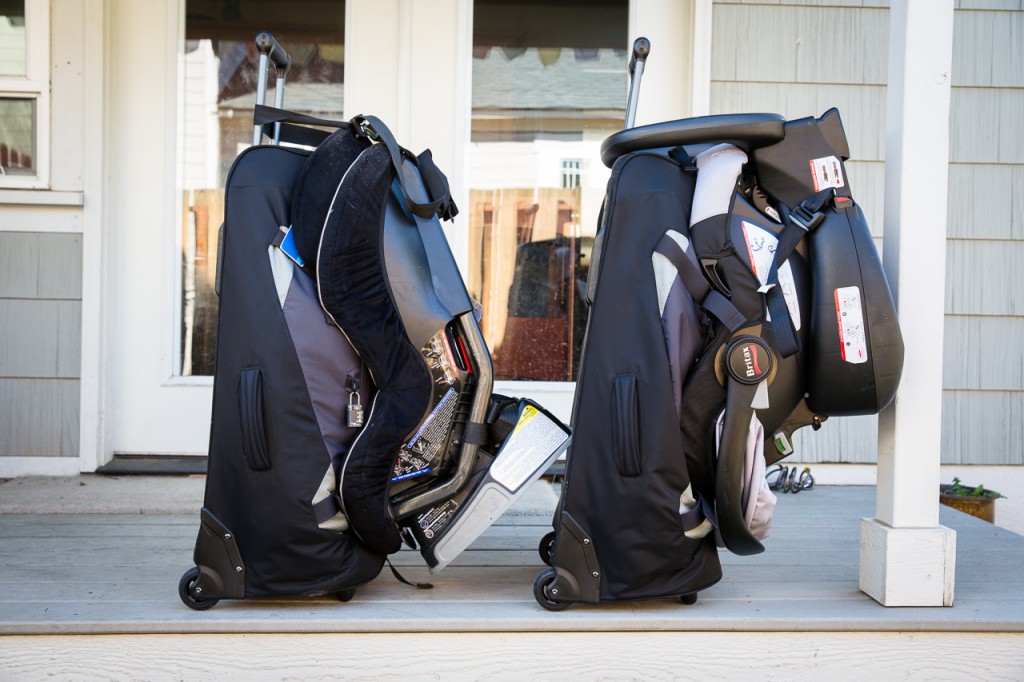 The duffels have the all-around solid construction we have come to expect from Deuter, and I have no doubt we will still be using these for many years, just like my trusty “mailbag.” And perhaps the best feature -- for those who are not quite ready to fully give up backpacks and duffels for travel, or for when the terrain becomes to rough to roll -- is the zippered back panel that opens to reveal a full backpack harness. It turns out you can still hold on to your dirtbag roots and have a respectable piece of luggage at the same time.

To Helion with you

If it's possible to fall in love with a rolling suitcase, I have. What, you say, could remotely...
Read More

What's holding you back from backpacking with your kids?

It's not that hard. Really. Backpacking with kids doesn't take a super human effort and the rewards...
Read More

The Magic of the Northern Reaches

For some it's the West, but ever since I was very young, the idea of going "up north" was...
Read More