Which Way to the Gun Show?...and Other Tales from Red Rocks with the Deuter Guide 40+ SL 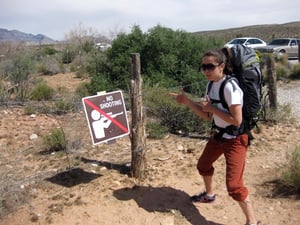 For the first time ever, I trained consistently all winter in the gym. I came to enjoy the plastic holds, and the consistency that indoor training provides. My friends and family witnessed my fitness and I was often asked, "which way to the gun show?!" There are several downsides to the gym, namely rush hour (around noon and after work) and the lack of the approach to climbing, i.e. from the parking lot to the gym door.  But as snow continued to fall in early April and I refused to renew my gym membership, I began to wonder were to turn for the next 'gun show.' 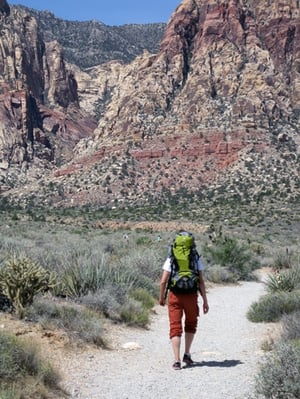 The answer: a road trip to Red Rocks, just outside of crazy Las Vegas. The trip is about a 12-hour drive from Boulder. My partner and I beat an early April blizzard that hit the Front Range the day after we left.  This was my first time to Red Rocks and I got exactly what I asked for; spectacular climbing on multi-pitch routes. Everything felt like six stars.

I had the opportunity to explore a lot of different areas and enjoyed some of the classic routes like Tunnel Vision, Birdland, and Lotta Balls. Every route I climbed offered something new to enjoy. From crack climbing to face climbing to chimney climbing, sometimes all three on the same route. The only pack I needed was my Deuter Guide 40+ SL. The pack was big enough to carry my gear, but small enough to scramble around while route finding. The Guide 40+ SL helped keep me organized with the option to divide the pack internally into sections. I always kept my shoes and harness in the bottom compartment. In the main compartment I kept the rope, warm clothing and extra water. The main compartment has a convenient side zipper. If my fleece was at the bottom under the gear, I could use the side zipper without having to un-pack and repack. The lid left enough room for food and car keys. I was so glad I had this pack for the trip. 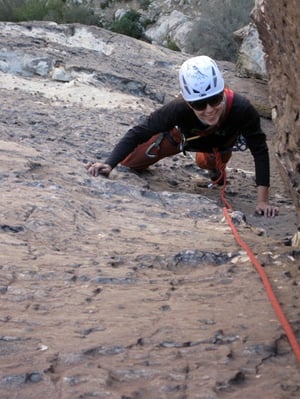 Usually what happens in Vegas stays in Vegas, but this time I am going to tell all. Red Rocks was crowded. Rush hour at the gym, five parties on one route crowded. The good news; the climbing was still fantastic. The other good news; you can escape the crowd by longer approaches. The classic routes that are easy to get to were well worth every hour spent at a belay, but I am interested in what is deeper in the canyon. Red Rocks is a gem and there is so much more to explore.

Climbing outside is one of my favorite things. I am excited to take a break from the gun show (AKA the gym) and head outside for some long trad climbing. Cheers to a great climbing season ahead.

Get ready for climbing season!

Road Trip With A Guide 35+ To The South East

It's time to get on the road for a road trip this winter. Where do we go, who brings what, and how...
Read More

I don't have a car, but Deuter backpacks have created a way for me to have an easy commute, no...
Read More

The Deuter Guide series packs are starting to transform with little tweaks that are making them...
Read More