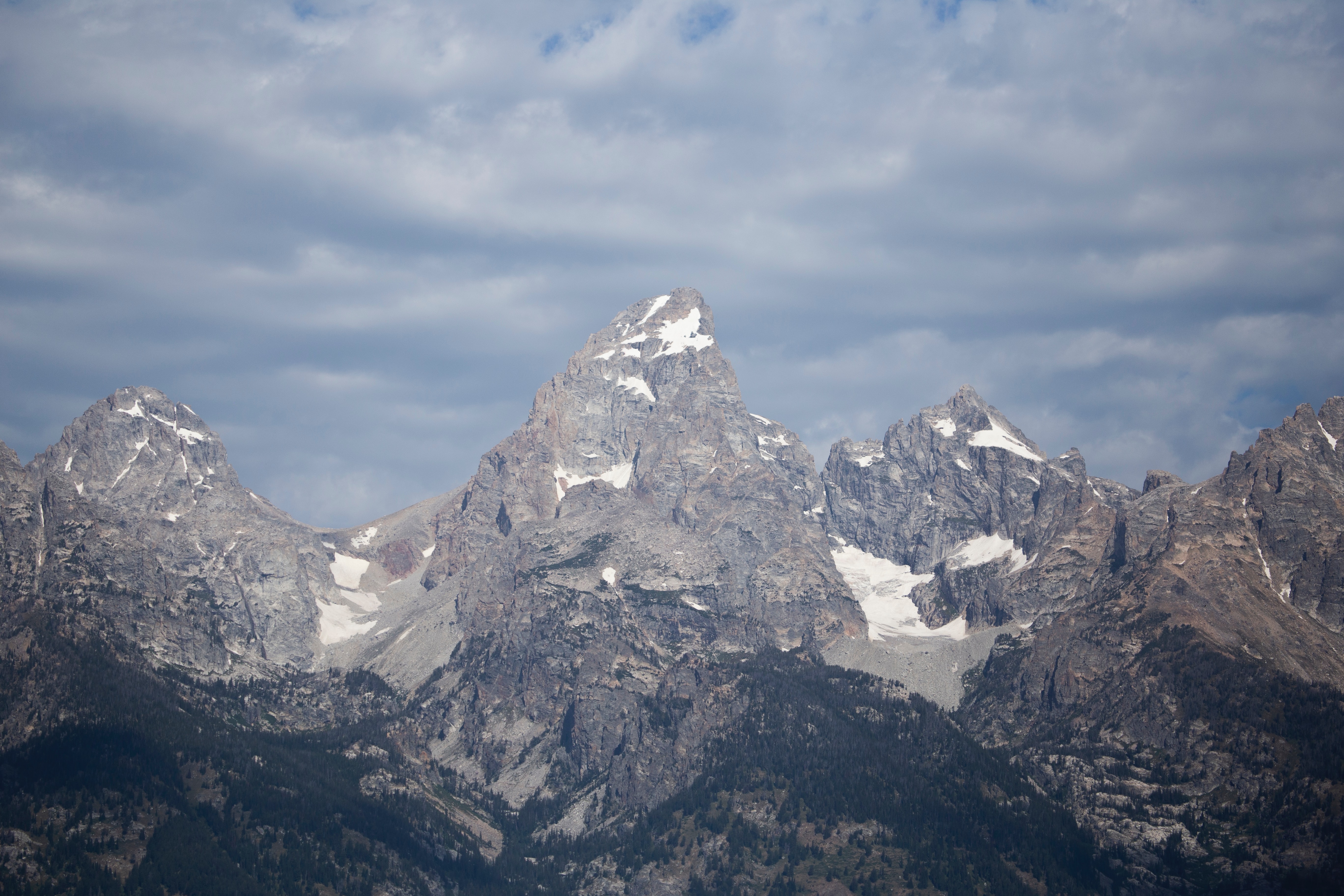 Guides in the Face of Disaster

Clay, my partner, and one of our close friends, Ryan, planned to do the Cathedral Traverse in the Teton National Park.  This traverse covers three peaks: Teewinot, Mt. Owen, and The Grand Teton.  It is one segment out of the Grand Traverse, which is also on our radar for future climbs.   After copious amounts of research and multiple conversations with park climbing rangers, we decided to get a permit and split the traverse into two days.  Day one we would summit Teewinot and Mt. Owen, bivvy at the Grandstand (which is at the northern base of The Grand), and day two we would summit The Grand Teton via The Italian Cracks and descend through Garnett Canyon.

The night before, we stayed at Jenny Lake campground.  This is the closest campsite to the Apex trailhead at the base of Teewinot, and made our morning commute easy.  We woke up around 2am to head over and planned to be hiking by 3am.  Our goal was to get up above treeline before sunrise. The Apex Trail is the steepest trail in the park, so we took our time, with 25-35 lb packs on our backs.  We also expected to be climbing around 14-16 hours on day one, so were conserving energy as much as we could. 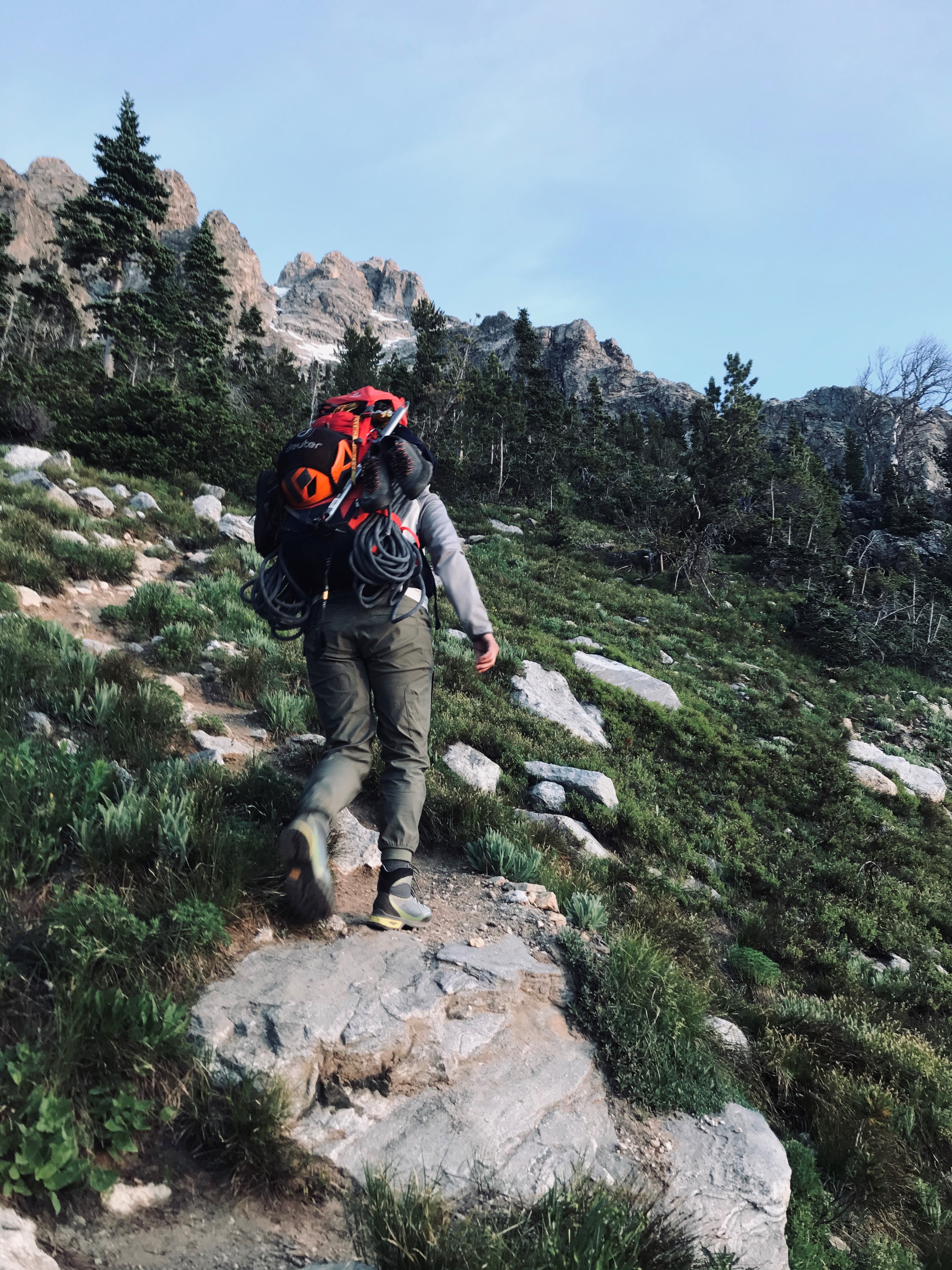 This is a full alpine climb.  Once above tree-line, we transitioned into our harnesses, helmets, and crampons.  Here we would be traversing over two large snow fields, with the use of an ice axe for stability.  Once we got through the snowfields, we strapped our crampons to our back, where we continued up through some 3rd class scrambling. (p.s. I love the gear loop on the waist belt of my pack, because I could easily clip my axe to it, making it easy to grab as needed!)

Clay was guiding, I stayed in the middle, and Ryan followed behind me. I was feeling great!  We were about 6-7 hours in and the summit of Teewinot seemed so close!  As we continued up, we came to an awkward step-over between two large boulders.  At this point, I looked down and could see a large flat rock, but could not see anything below it.  The terrain we had experienced up until now was a combination of small ledge systems that we were able to weave through… at no point did we feel ropes were needed, although we were prepared to use them up high.  I felt like the step over looked a little far from the rock I was on, so I adjusted my body and moved down the side of the boulder, to position myself closer.  As I reached my foot over to the opposing rock, I shifted  to distribute my weight, and my foot simply slipped off.  I went to stand forward to grab something and catch myself (natural instinct), but the weight of my pack pulled me straight backwards. 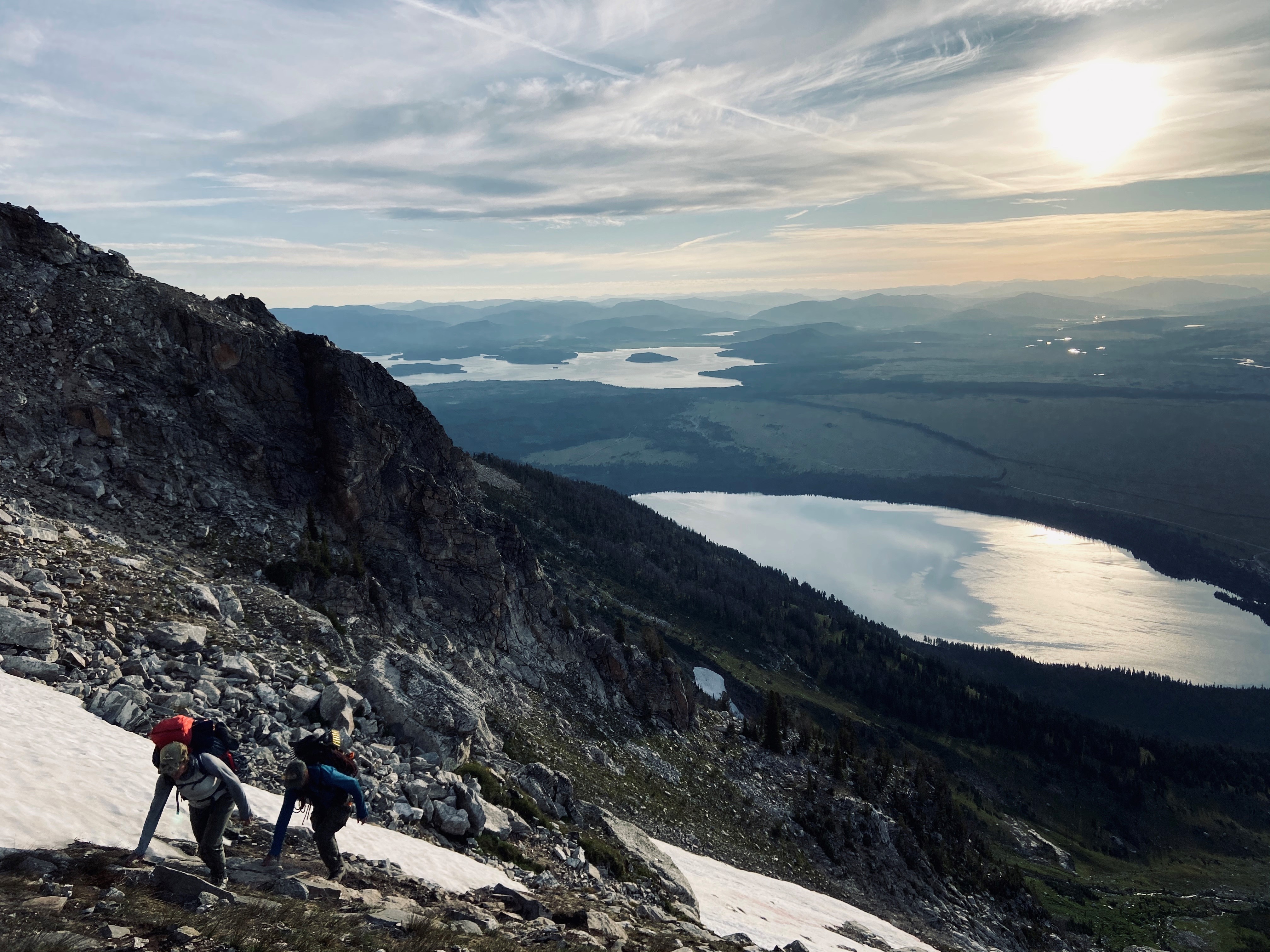 It felt like slow motion… As I fell backwards, Clay said he could see how big my eyes were through my sunglasses.. I could hear Ryan yelling my name… shock, fear, and confusion that this was really happening, circled through my head. It was almost like time stopped.  As I fell, I landed straight on my back first, and credit my backpack to not suffering any kind of back injury. I hit the lower portion of my back, blowing part of the seam on my backpack… I remember feeling the pain on my kidneys, and right hip.  From here I bounced over and continued to tumble through what turned out to be a 25-30 foot rock chimney.  The only way to describe it was violent.  I had no way to stop myself, I couldn’t see anything but the blur of the rock, and the noise of my body and gear hitting the rocks.

Before I stopped falling, I remember coming forward and seeing a pile of snow around a rock creating a rock moat.  I didn’t know how far down the space in between the rock and snow would be, but I knew that’s where I was headed.  I ended up hitting the snow pile first, and then fell down in-between it and the rock.  Finally the noise was gone and I could hear Clay and Ryan yelling down at me.  I sat up, took off my pack and helmet and told them I was ok. They told me not to move, although I was already sitting up. I took a few deep breaths to feel my body and to target any potential pain.

My first thought was my kidney. I placed my hand on my back and took a couple deep breaths in and out, and it seemed ok. I looked down and could see a little blood on my pants but couldn’t quite tell where it was coming from.  Luckily, it was just from a small scrape on my hand.  I noticed my arm felt heavy but wasn’t in pain and had a small dent on the side, which I would later find out was a broken bone. I also experienced some pain in my ankle, which I was happy to find out was just a sprain. I had a light concussion, but all in all couldn’t believe how minimal my injuries were.

Clay and Ryan quickly made it down to me, assessed my body, and helped me get out and onto a level area.  Both of them are Wilderness First Responders and have been for some time. They were able to fasten a sling for my arm, and after a group assessment we decided that we could self rescue and safely get out under our own skill and resources.  Ryan and Clay consolidated my pack into their own so I could be as comfortable as possible for the way out, and we began our descent off the mountain.  After another 5-6 hours of being lowered down rocks and through snowfields, hiking down the trail and shedding some tears along the way, we made it back to the car around 5:30pm. 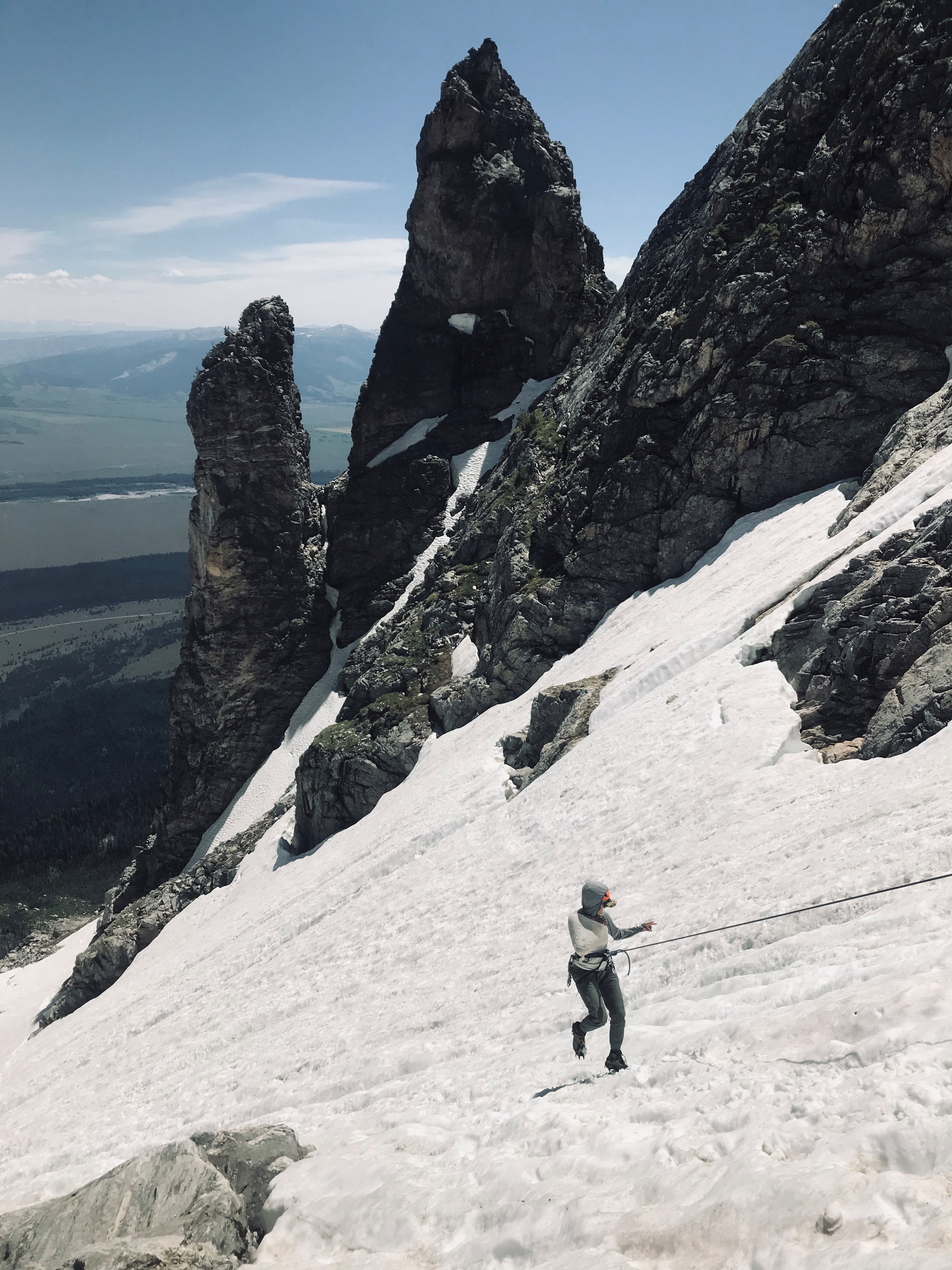 I fully attribute my lack of injuries to my backpack and helmet. The fact that the waist belt on the pack stayed put and didn’t let the pack shift around my back through my tumble, as well as the padding on the hip belt absorbing some impact saved my hip and kidneys from receiving a direct hit. A blown out seam and a cracked helmet saved my life.  I don’t think I will ever buy different backpack or helmet again.

Thank you for taking the time to read my story…. This is the first time I have put “pen to paper”.  Things could have turned out completely different that day, and I am grateful to be alive and sharing my experience.

Ice is Nice - Headed to the Ouray Ice Fest!

Deuter is stoked to be sponsoring the Ouray Ice Festival this year and we are headed down to be a...
Read More

Why You Should Consider Ditching the Roadside Crag

Don’t get me wrong—roadside cragging is easy and convenient. It's great if you want to hit multiple...
Read More