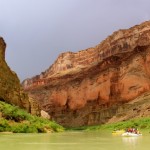 A private permit to raft the Grand Canyon for sixteen days.  Sixteen of the most adventurous people “Scrap” Kruger could scrounge up.  Flagstaff, Arizona.  July 7th, 2013.  Game on.

We acquainted ourselves over whiskey and cards, did our final preparations, and headed to Lees Ferry to rig our boats with 105 cases of beer, many coolers of food, extra gear, and our personal items.  I left my phone and watch at home, mentally checked-out of home stressors, and pushed off the shore into a magical world of wilderness perfection.

Each day brought so much unique awe.  We gawked at crystal blue water inside canyons and rock layers depicting millions of years in time.  We hiked to amazing views and scrambled and sloshed through slot canyons.  We grilled steaks in the dark with a rattlesnake in camp and cooked chorizo breakfast burritos on rock ledges.  Hummingbirds gracefully buzzed around the yellow Deuter SL flowers in my hair and I loved finding the balance of chaos and control while paddling an inflatable kayak through rapids.  I pondered our world’s geological evolution and dove into intricate and deep conversations with newfound friends.  We tried to stand-up-paddle the kayaks, swam the Little Colorado with our PFDs strapped to our butts, searched long and hard in eddies for Josh’s lost spectacles, and watched the Milky Way cast shooting stars across the dark sky.  We got caught in a lightning storm on the water that revealed beautiful mist and waterfalls coming out of the canyon walls.  I squished a scorpion in my tent, drew the canyon in oil pastel, and listened to the sounds of nighttime.  Overall, it was a beautiful blend of laughter, contemplation, excitement, and restoration. 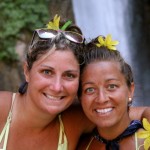 One story of this adventure stands out in my mind.  The boatmen had been talking about Lava Falls for days.  It’s the biggest rapid on the river, a Class 10, and comes just two days before the take-out.  The night before running Lava, we got hammered with a down-pouring lightning storm.  We hid in the bushes and recited rhymes while waiting for the loud claps and flashes to subside.  With large rains, side canyons often flash, sending tons of red sediment into the Colorado River below.  The canyon must have flashed something awful because when we woke up the morning of Lava, the river was a thick and opaque red-brown hue and so heavy with sludge. It looked like something out of Charlie and the Chocolate Factory.  The water caught the light differently; more ominous.  The mood of our group was somber.  Smiles were not abundant.  The boatmen rigged-to-flip tighter than ever before.  At this point, I wasn’t sure what the rapids of Lava would look like, but I knew one thing:  they must be big.

We set sail.  Lava was less than two miles downriver.  Before too long, we could hear it.  The low rumble of big water.  A lower and louder rumble than we’d heard from any rapid yet.  We tied up the boats a bit upriver from Lava, as we did before all big rapids, and hiked down the shore to scout it.  This enables the boatman to see the length and complexity of the rapid and choose their line through it.  Typically during scouts, the mood is mellow and serious.  The boatmen know the consequences of taking a bad line and will do everything within their power to keep their passengers safe.  This time, barely anyone talked.  I remember standing on the shore of Lava, thinking to myself, “Whoa.”  It was long, gnarley, and really choppy.  The thick red water made it look downright frightening.

Back in the boats, our boatman named Gool, laid on his back with his eyes closed and moved his arms through the air, visualizing his line.  There really is no great line in Lava.  No matter where you go, you’re in for a ride.  But some lines are certainly better than others.  The first boat headed into Lava as everyone anxiously watched.  They made it through.  Boat two and three told the same story.  We were the last of our four boats.  We positioned ourselves with a little extra precision and made sure our handholds and foot positions were strong.  Carlie was on my left and Carter was on my right.  All three of us were standing in the front of the boat while Gool, on the oars, positioned our raft to head into Lava Falls.

Each big rapid prior was exciting for me.  A mini adrenaline rush perhaps.  Maybe I just like being out of my comfort zone.  Heading into Lava was no different.  I trusted Gool would take us through perfectly, just as he had done on every single rapid thus far.  And then, before I could think any other thoughts, we headed straight into Ledge Hole.  No one goes in Ledge Hole.  At least not on purpose.  But there we went.  Into this man-eating and boat-mangling hole.  Arguably the biggest hole on any river in the lower 48 states.

The drop into the hole was fast and bigger than our 18-foot boat.  I just remember Gool yelling “Hooooold ooonnnnn.”  Little did I know at this point, we were completely off of the line Gool had intended to run.  We hit the bottom of the hole with so much force that the front of our raft folded, causing the three of us passengers to lash back against the frame of the boat.  My left calf hit the metal frame so hard that I worried my leg was broken.  From here, began the most violent and terrifying 20 seconds of my life.  The hole wouldn’t let us escape.  We got thrashed as the boat got hammered back and forth, the hole pushing against us from all directions including the bottom and the top.  I remember whacking body parts on things, but to be honest, I can’t tell you really what was happening.  We almost flipped multiple times and I tried to high-side with not much luck.  The hole was so powerful, so unforgiving, so much bigger than me. 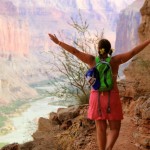 Gool was ejected from the boat first, followed by Carlie and Carter.  I didn’t actually see any of them get tossed, perhaps for intense concentration of holding on or maybe I simply had a huge wave in my eyeballs.  Either way, the next thing I knew the hole had decided to let go and spit the boat out to river left.  The next few seconds are also a blur, but my thoughts involved taking notice of tons of water in the boat and realizing that I was the only one left in our floating raft.  I then looked amongst the whitecaps for my three boat-mates.  I spotted Gool and Carlie a bit down river while Carter floated about 25 feet to my right.  A throw rope would have been impossible in such waters and I had to convince myself they would be ok swimming.  After all, they knew the rules,  “Don’t take a breath until you see the sky, keep your feet downstream, and swim to safety if you can.”

I had rowed a couple of times on previous days, but I was by no means adept at taking on large rapids.  But I also knew, quite clear in my mind, that I had only one choice.  I had to row through Lava.  I crawled up to the boatman’s seat to get the oars, all while the boat still haphazardly floated over the choppy red anger that Lava still had to offer.  I took a wave to the face.  And another.  One oar was completely in the water, dangling only by a rope.  I picked it up out of the water and angled it as best I could for maximum power.  Without the oarlock, my right oar was weak and unstable.  The river was taking me left, towards a cliff-like rock wall that was lined with rapids.  Exactly where I didn’t want to go.  With one good oar and one gimpy oar, I got the boat lined up properly for me to row backwards.  This position is where the most power is.  Waves splashed onto the boat and I couldn’t help but turn in circles.  I wondered about my three boat mates.  The other three rafts were waiting in the eddy on river right.  I knew I had to get there.  So, I rowed.  I rowed so hard my hamstrings burned and my lungs were on fire.  But I made it, to the bottom of that eddy.  To safety.  To my friends.  To my three boat-mates who had swam frantically to throw ropes.

What happened next was a whirlwind of emotions.  People cheering.  People coming to rescue me from exhaustion.  People making sure the three swimmers were OK.  And I was stunned.  I was proud.  I was terrified.  I was overall, so thankful.  Thankful for our safety, thankful that our boat wasn’t upside down floating whichever way it pleased down the Colorado River, thankful that my leg seemed bruised instead of broken, and thankful for mother nature once again reminding me of the delicate balance of humans treading on her turf.

The aftermath involved lox on bagels, cracked beers, and a whole lot of long hugs.  While it’s always “five after eleven” on the river, it was probably only 9 AM to those suckers in cubicles back home.  After we ate Lava and bagels for breakfast, we carried on down the river, ice on our injuries and stories being told.  I eventually slept, as my adrenaline crashed and the river calmed down to a drift.

That day, Lava showed me the power of water, finding strength when things are hard, and teamwork within our community.  I am grateful, not for the most violent experience of my life, but for the magic that happened in the aftermath.  For if not the storm, the rainbows would still be hidden. 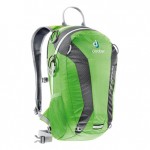 The Grand Canyon is a place of such unexplainable beauty and rejuvenation.  Humbled by its vast walls yet empowered by its own unique religion, it truly is a wonder of our world.  From the first corner to the last, the Grand Canyon is a stunning palette of color, texture, and form.  Learning from each of the 15 other amazing people of our cohesive community was simply a treasure.  Living without time provided more truth to feelings of hunger and energy.  Living in the present allowed absolute authenticity and engagement in each moment.  In the end, that sixteen-day sequence of moments made up a magical journey of grand magnificence, friendships, and spiritual renewal.  Here’s to the Grand.

The Speed Light 10 accompanied me on this journey.  Small and packable, it was perfect for hiking side canyons with the essentials of sunscreen, water, and a camera.

I owe Nick White one of my best friends for being the first to take the plunge into marriage. It...
Read More

Many of us enjoy climbing for the feeling of movement over rock, and no one wants to be weighed...
Read More