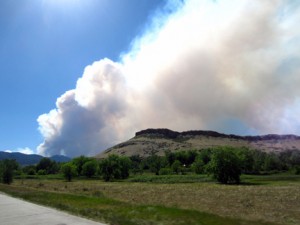 Sometimes adventures just don’t go as planned. This was one of those adventures. For months, the plan was for a bunch of cool Colorado chicks to ride bikes from Boulder to Fort Collins, spend the night, and ride back the next day. Pretty simple, it seemed. Last summer, I rode my bike across America, pulling a trailer through 113 degree heat, snowstorms, camping in weird places, and wishing I could afford a personal masseuse. That was hard. Riding 50 miles to Fort Fun to camp one night along a nice river with a sag vehicle sounded like a walk in the park. Until everything went wrong.

First, I blew out my knee playing soccer. Apparently, I’m not as limber as I once was and playing in a coed rec soccer league was harder on my body than I expected. So, per doctor’s orders, I could ride… but had to ride slow. While I was visiting doctors for my knee, my friend Sara was nursing a calf injury. We would both be lagging behind on our way to Fort Collins. No reason to change plans for that. 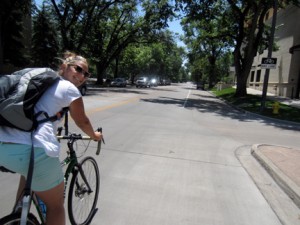 But then, two other friends bailed on the whole trip. What more important things could they be doing other than going on a weekend adventure? And then the morning of the trip a third girl decided she was out. So that left Sara and myself (the two gimpies) and the other Sarah, who’s plan was to drive our sag vehicle. We sat around the morning of blast-off, eating bagels, and laughing about it all and decided to just drive to Fort Collins with bikes on the roof. Sometimes, you have to do what feels right. And so we did just that.

On the drive, we noticed a pretty substantial wild fire rising above the foothills ahead of us. No, we thought, it couldn’t be the Poudre Canyon, our destination. But when we got closer to Fort Collins, we realized that fire was indeed right where we were planning to camp that night.

As many of you know from the media, the fire season in Colorado started off with a bang. What the media doesn't really explain: Fire is a natural part of a forest ecosystem. The fire itself isn't really the problem. The problem lays more in the battle of shared space between human beings and Mother Nature. People want to live in the mountains, and more houses are creeping up into the foothills. Why we're having so many fires is due to a couple reasons. It was a terribly dry winter and a really hot spring. There has been a huge amount of fire suppression over the years and the forests are thick. And, there’s a severe overpopulation of the Mountain Pine Beetle... largely due to global warming (extreme colds wipe them out but we haven't had those). These beetles live in tree bark and carry a fungus that eventually kills the trees. There are many dead trees out there and our forests are one big, dense tinderbox. They actually need to burn to be cleared out and get back to proper health. However, there's obviously huge devastation when fire burns homes (I can't even imagine). Firefighters work to find the balance in letting the fires burn and saving neighborhoods.

On this day, we knew pretty instantly as the smoke plume’s size grew super fast and the proximity was near, that it was no small fire (it was indeed the High Park Fire). With this, our plan of camping quickly faded. Now what? 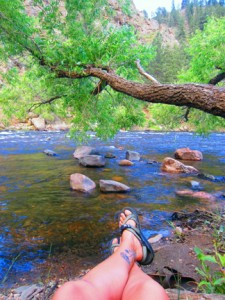 We ended up drinking tea in town, riding bikes around the city, sitting by the river, and picnicking. I kept myself hydrated with my Deuter Race EXP Air pack, of course.  We ended up crashing in the backyard of a friend’s house and woke up with a layer of ash on us, smelling like campfire. It was definitely one of those fly-by-the seat-of-your-non-chamois kind of days. It wasn’t hardcore. It wasn’t epic in any way. It was certainly not an adventure I thought would be worthy of Deuter ambassador writing. But the more I thought about it, I realized that surely it was. The only thing that stayed consistent through the whole thing was that Race EXP Air pack. I knew it was coming with me from the start. And it kept me hydrated just the same.

Sometimes adventures go amuck; injuries, natural disasters, changes of plans.  All of these things are part of adventures in the first place. Adaptability is a huge part of playing outside. It turned into an awesome weekend with my Deuter pack and a couple of friends, just cruising around on a semi-urban adventure. Hardcore adventure, silly adventure, unknown adventure. Sometimes all that matters is that you’re out there, adventuring in some way, whatever that means to you on that particular day.

Choose your own adventure!

Escape In The Concrete Jungle

Deuter Guide 35+ has been helping this winter. But why did it take so long for me to get a pack...
Read More

Each year near early May, skiers like myself get excited because high exposed couloirs become...
Read More