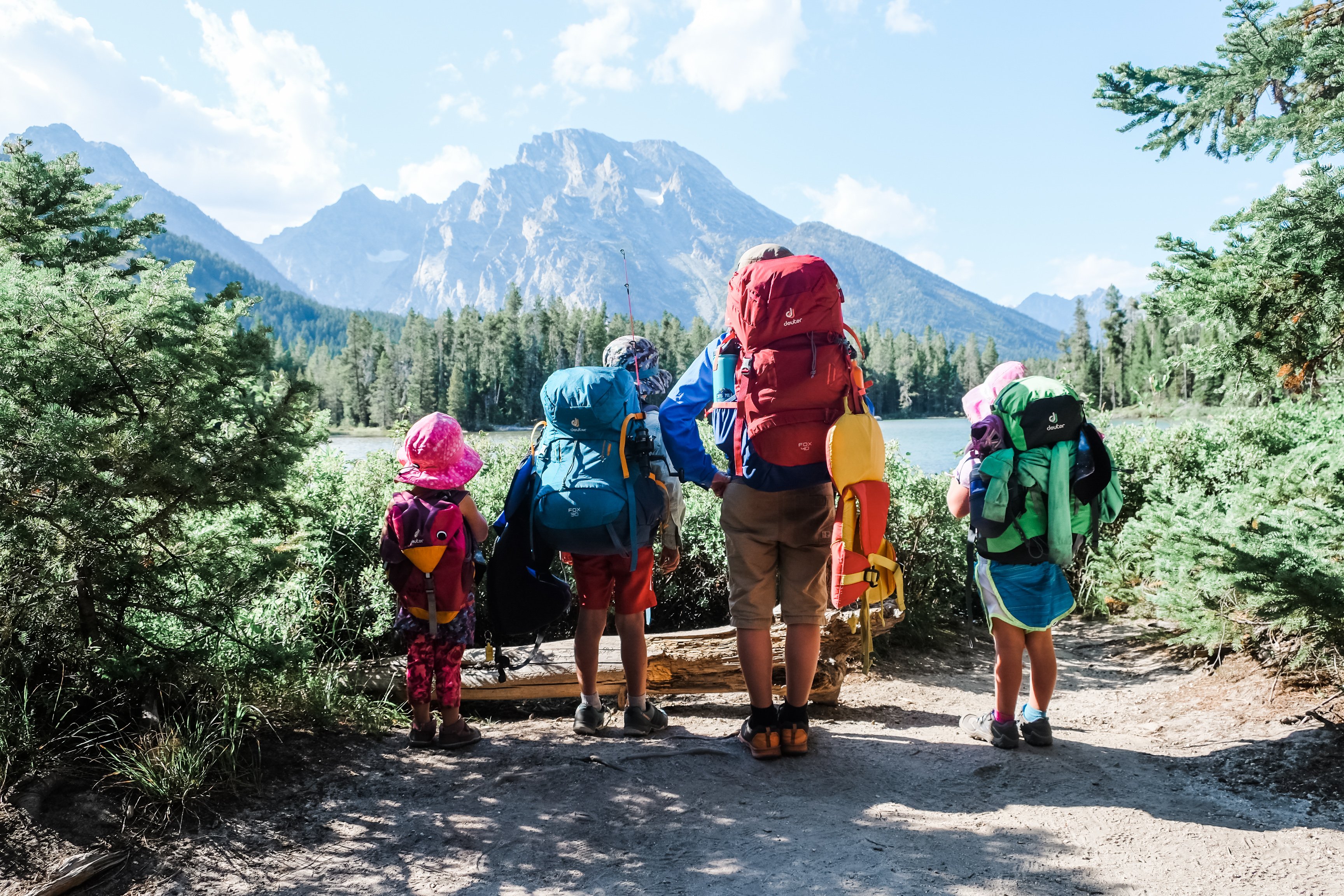 Summer in the Tetons is overwhelming to say the least: The beauty, the opportunities, the crowds. As a general rule, we try to avoid Grand Tetons National Park until about September when everything just tends to wind down a bit and allow for a more relaxed experience.

When we were given a last minute opportunity, however, to backpack into a boat-access-only site on Leigh Lake, we hesitated only a minute before jumping in. And by last minute I mean literally the morning of the night we could use it.

Sites are reserved months in advance in one of those hover-over-your-computer-and-click-fast operations and our friends couldn’t use their permit for the first night. It was hard to pass up.

While packing for a one night trip in a couple hours isn’t really that big of a deal, we had yet to take our two youngest (ages 2 and 3) on a backpacking trip. My husband and I agreed that yes, the idea was crazy, but worth the effort to attempt.

Truth be told, I wasn’t entirely sure we would be successful.

We rushed home from a one-nighter at Spaulding Bay (the only backcountry site in GTNP you can drive to) and quickly switched gears from car camping to backpacking/boating.

The trip itself was only a mile of hiking to Leigh Lake where we were borrowing NPS canoes (employee perk) and then canoeing a few miles to our campsite. We were extremely lucky there were canoes available to borrow and it saved us from having to round up our own boats. Most people just put in at String Lake and portage to Leigh Lake.

The fact that we were only doing one night was a bit of our saving grace - we figured we could muscle enough food for all seven of us in for 24 hours without issue. Because we had no dried meals and weren’t sure about the fire situation, I quickly threw together food we could haul. Breakfast burritos for dinner, bagels, lots of granola bars and some dried fruit. Food is always the hardest part.

The three older kids were expected to haul their gear. Jack (age 10) carried his gear and some of the food in a Fox 40, Peter (age 8) used a Fox 30 and Liza (age 5) hauled her gear in a Climber pack. It was a stretch for Liza with the load she had, but a mile is a mile and she rocked it.

Mara (age 3) wore her Kikki with her clothing, Nora (age 2) sat in the Kid Comfort Pro throne and Bill and I hauled the rest of the gear in every nook and cranny of our packs.

The hiking part was the easy part - we knew where we were going and what to expect. The trail is shaded and flat. A canoe ride, however, was something we hadn’t done as a family yet. And we weren’t entirely sure how far of a trip it was.

We ended up canoeing for over an hour. The two older boys were given a quick canoe-paddling lesson, and we were thankful to not be fighting a headwind. While many backcountry sites on Leigh Lake are accessible via hiking, site #16 is not which meant we knew we had to paddle across the lake. 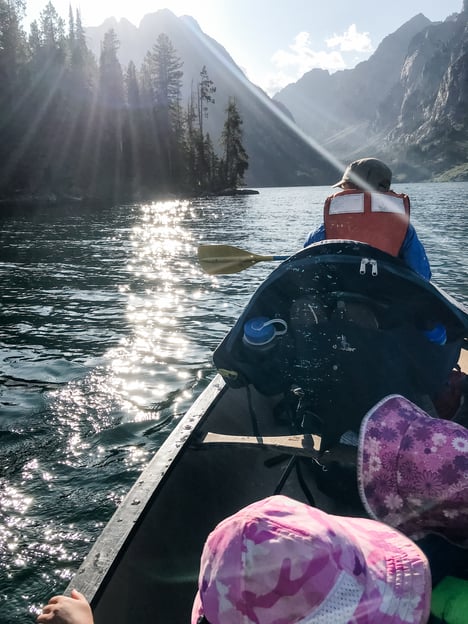 We were greeted by the glaciers on Mount Moran and a quiet and clean site.

The kids enjoyed a you-did-it-thanks-for-not-melting-down sucker, and we wished we had brought matches for a fire.

I am relatively certain our boys spent 89% of the time we were there fishing from the canoe and the other 11% of the time throwing in rocks. The girls did a little of both of those things, some nakey swimming (backcountry toddler perk) and just playing on the various logs and rocks around the site.

In the morning we canoed over to where many people access Mount Moran climbing routes and happened upon a grizzly mama and two cubs feasting on berries. It was a treat to watch them from the canoes for a couple hours doing what they do best.

The return trip was a little tougher with tired kids and wishing we could stay another night.

Moral of the story? Just go. The learning and memories are worth it!

#MyDeuterAdventure – Enter to Win a Trip to Germany!

Are you looking for your next great adventure? Share your favorite mountain moment with us on...
Read More

Sledding in the Swiss Alps – fun for the whole family

Winter is here. Are you the type of person who hibernates inside and waits for winter to pass? Or...
Read More

Prior to having kids I enjoyed going on long day hikes and overnight backpacking adventures. With...
Read More