An adventure with Montana grizzly bears or Costa Rican sloths? 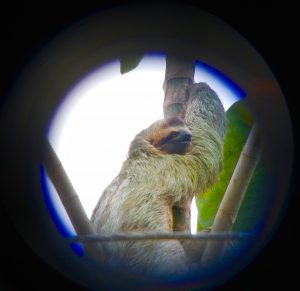 Every year, our family tries to go bigger on our annual summer adventure. This year, for the first time, we decided to take it down a few no tches.

After months of planning a ten-day expedition into the wild Absaroka Range with our eight-year-old, we threw it all out the window at the eleventh hour and decided to trade in Montana grizzly bears for Costa Rican sloths.

A sweet airline deal and a dose of laziness launched us from packing sleeping bags and dehydrated food in our ACT Lites and Aircontacts to packing swimwear and sundresses in our Helion 80, Traveler 60+10SL and even our more rugged Freerider Pro.

Since we had already opted for a tropical vacation, we thought why not and decided to go the full Monty with a tour company that planned our entire weeklong itinerary. I’ve got to say, I vacillate from feeling embarrassed that our adventurous Deuter family decided on a luxury tourist vacation, to feeling justified that for once we did what many other families do on vacation—relax.

Costa Rican sloths are called oso perezoso, which means “lazy bear” in Spanish. The sloths quickly became our favorite animal, a symbol of what we as a family decided to do instead of slogging through the mountains.

At least we weren’t indoors, right?

As we sailed through jungle canopies on zip lines, cruised along wide rivers teeming with crocodiles, swam in azure lagoons, soaked in volcanic hot springs and ogled at the diverse wildlife, it dawned on me that outdoor adventure doesn’t need to look like a weeklong hike in rugged terrain with loaded backpacks.

Adventure is what you make of it.