McCarthy, Alaksa -- a community of 200 people -- is the perfect starting point for an Alaska-sized adventure. This is where my boyfriend, Jason Denley, and I call home during the summers, guiding for St. Elias Alpine Guides. An end of the road town, McCarthy is nestled in the heart of Wrangell-St. Elias National Park. 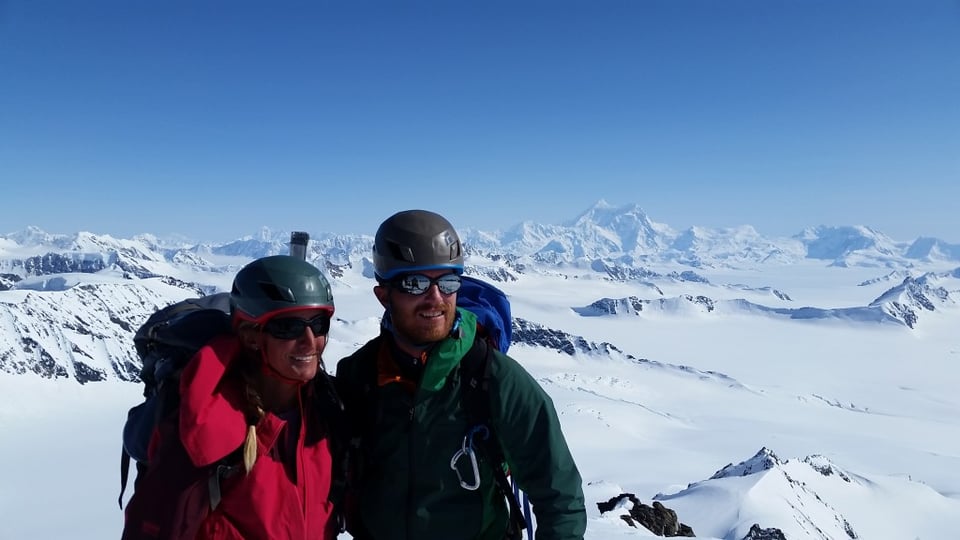 Jason and I on Flight Path at Mt.  St. Elias.

Summer began as we were spoiled with 10 cloudless days, skiing and climbing with fellow guides on the Upper Baldwin Glacier in the St. Elias section of the park. My favorite climb on this trip was "Flight Path Peak" as named by local pilot Paul Clause. After approximately 1,500 feet of sustained 60-65 degree snow, alpine ice, and mixed rock we were rewarded with stunning views on the summit of Mt. St. Elias.

In addition to endless mountaineering opportunities, backpacking and ice climbing on the abundant glaciers throughout the park filled a majority of my time. The bush-plane only access to the trail-free backcountry of the Wrangells provided a stunning backdrop for backpacking. The Deuter Guide 45+ pack with built-in ice tool holders and an expandable brain was my go to pack for the many ice climbing trips I took out on the Root Glacier.

Wrangell- St. Elias National park has an adventure for everyone, and is one of the last places in the world that is primarily untouched by man. If you're willing to take the road less traveled to get there, you will be greatly rewarded.

The Majesty of Winter in Alaska

The mountains of Alaska hold some of the most dramatic and stunning views I could ever imagine....
Read More

Searching for Powder in Alaska

Have you ever wondered how mountaineers feed themselves and stay hydrated at high-altitude on...
Read More