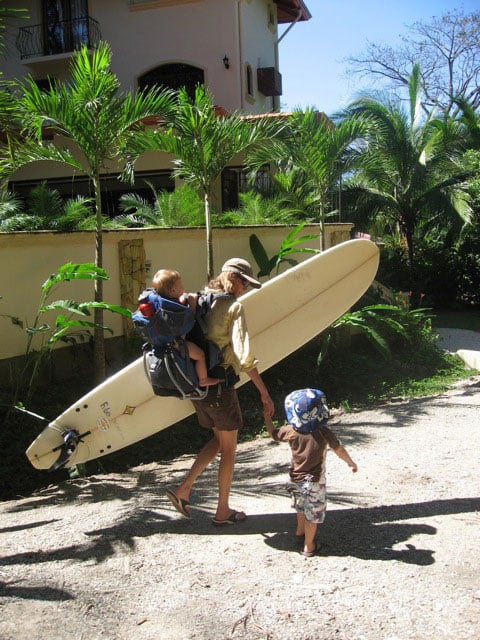 We just got back from our first third-world trip with kids and I have to say we pulled it off. But to say it was due to our skill and grace would be exaggeration- I’ll chalk it up to good weather, good luck, and good gear.

We flew to Liberia, Costa Rica, and if you’ve ever been to this slice of heaven you’ll know straight away that this third-world country really means a shade off of Hawaii, even a step above many US hamlets. So we chose wisely on our first foreign foray... Liberia was minutes away from the beach, with Subways and CostCo sized markets around the corner (not a lure unto itself, but not the middle of Calcutta, either). We landed, promptly fell asleep minutes away from the airport, and awoke to realize we’d really escaped Seattle and were in the tropics- YUM. 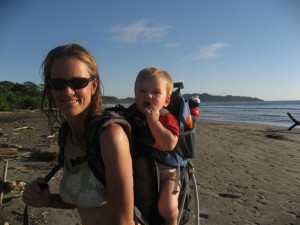 Taking our well-advised micro 4WD and GPS unit we wended our way up north through Guanacaste province to the Blue River Hot Springs at the foot of the Rincon de la Vieja volcano. Hard to drive in the opposite direction of the beckoning beaches but we knew we’d be heading that way eventually. Two loose-jawed and double-visioned hours later we’d fared the “unpaved” (more like war-torn) dirt roads and found ourselves at a hot spring resort.

Beautiful pools of varying temperatures, shallow enough for kids to play at the entry, and even a water slide into a cold plunge. We arrived just at the end of the rainy season so the lush jungle greeted us with wonderful sounds and sites. An on-site guide pointed out a poison dart frog and lead us through an arboretum complete with bats, other-worldly plants and Costa Rica’s famously brilliant butterflies.

Next day we were led to a little known river streaming from the side of the volcano that is locally famous for it’s brilliant blue sheen. We crossed streamlets and ogled at the numerous waterfalls before getting to take a dip in an upper pool- so clear but not too cold. We were NOT in Seattle anymore and it was so nice to feel like we were actually on vacation- so this was December near the Equator!

I always wonder what gear people take when they travel to make them seem to move effortlessly so far from home. In the final pack it was down to counting diapers and choosing flipflops or running shoes, trying to minimize. We debated about which kid carrier to bring- a soft pack that rolls up into a ball or our Deuter Kid Comfort II - but the latter has proven time and again to be an essential piece of equipment. The frame pack won out, and from the moment we left the airport curb we knew we’d made the right call. Our 26 lb 1 yr old Conrad could see all that was going on in the airport, in the grocery stores and on our wanderings, delaying his need to get down on the ground and taste everything Costa Rican. Envious comments from fellow travelers were not necessary to remind us that we had a key piece of gear. Not only did this pack accommodate either of the children (our 3 year old clamored to be carried as soon as he ran out of snacks), but it had the right compartments for all our storables. Wet bathing suits and (carefully wrapped) used diapers slid into mesh pockets, small camera tucked into the waist-belt pocket, waterbottles and snack cups were handy in other upper pockets, and bulky towels and extra clothes fit handily into the big cargo pocket. I could even slide a couple extra diapers or small items into the side body zipper behind 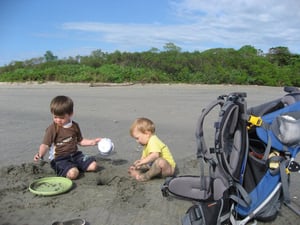 my back. Conrad’s favorite feature on this pack was the handle that mom and dad used to lift him up and down- he found it to be an ideal teething site- if not a bit sloberry when we went to use it. Finally, the fold out frame that tucks up when not in use is one of the pack’s best features, allowing for a streamlined pack while walking along a trail or through crowds, yet it opens up when you set the pack down, keeping the bottom of the pack debris-free. Handy when picking up and setting down a kid on the rainforest trail a sandy beach. A few other aspects we are in love with. The pack is widely adjustable, both for the horse and rider. The hip belt fit my skinny hips as well as my husband’s, and the shoulder straps can fit a baby who’s just learned to hold up his head to a 40 lb. child who’s too tired to finish a long hike. Both my children can still fall asleep in this pack which is really all you need to know.

Drawbacks of the Kid Carrier? The only problem we’ve had with this pack is that a couple of the pins holding the frame together have worked their way out. One time we lost the pin and the O-ring altogether and had to improvise to get us home. The other time the O-ring disappeared, the pin remained and we again punted in the field but pulled it off. The other comment is about the sun and rain covers. We have used the raincover once- it does work quite well to keep the occupant sheltered, at least their head (though legs invariably stay exposed). But the sun shield, when used without the cover has felt limited in its use, since the shield stands so high above the child’s head that it doesn’t seem to provide much protection. We’ve used it, though, and pulled it down closer the the kids’ heads by adding several wraps to the tethers. Despite these shortcomings, we have used this pack in many conditions, from skiing, hiking, traveling, grocery shopping, lulling the kids to sleep- you name it- and love it! We use it over a stroller, our fleet of which is collecting dust in the garage. But I digress here. Weren’t we talking about the beach in there somewhere?

Yes, that’s where we went next. 24 hours after a swim in the azure volcanic run-off, we found ourselves on Playa Guiones, near the small beach town of Nosara. Here we awoke to the sound of howler monkeys and big gusty winds as we arrived with the change of seasons. Our rental house was 4 minute walk from the beach, and 5 minutes into town. Lots of wandering with children in packs, on bikes, in tidal pools, in the waves. We didn’t stray from our digs for the week, just traded off surf sessions, kids’ naps, and jaunts to the ice-cream palapa. The beach week flew by- rice and beans, chips and salsa, margaritas and coffee- pool time and beach. Not much else to say about it. One giant sea turtle huffing her way up the beach to lay her eggs. Some jelly fish who left undeniable marks. Palm trees. Iguanas running along the road. Funky raccoons looking more Pleistocene than modern. And the world’s biggest grasshoppers (or whatever that is in CostaRican). Simple days, simpler nights- kids movies and margaritas, and a few beach reads.

When flights get cheaper we’ll be seasoned travelers to Central America. Till then we just have photos to remind us what it looks like in December outside of the Pacific NorthWest, and I like it.

Check out these fine online retailers

Q. Which Kid Comfort (KC) carrier is right for me? Deuter offers four carrier models to meet a...
Read More

I know a lot of you are very sad to see summer come to an end, but I for one can not wait to say...
Read More