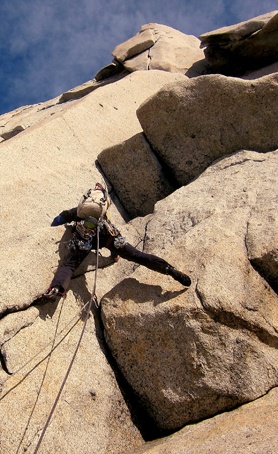 Many of us enjoy climbing for the feeling of movement over rock, and no one wants to be weighed down by a backpack. But, of course, they’re often a necessity. So, let’s think about ways in which to best compromise pack capacity, weight, comfort, and freedom of movement.

-Single Day Climbs-
Bring only what you need: A short effort might not require a pack at all. It’s easy enough to clip a small water bottle and shell to your harness, maybe even descent shoes too. If the climbing is very difficult, though, I like to have a small pack even for one-day efforts. This will likely be a small and very light pack, 20L in capacity (Speed Lite 20), and it will be carried by the follower.

On the approach to a long in-a-day climb, have one climber coil the rope(s) backpack-style, and both climbers wear their harnesses. For a long hike, I like to put on just the waist belt portion of my harness, leaving the leg-loops hanging off to the side. You can still clip a few items to the harness, but the majority of the rack, plus food and other items, will be carried in the pack.

While climbing, of course, the rope and rack will be in use, so the pack will be filled by food, descent shoes, jackets, headlamps, etc. On difficult pitches, it is possible to haul the pack. You can do this on half-rope-length pitches by having the leader pull up all the rope and toss the end back down to the follower. If you have a second rope, the leader can carry it as a tag line and use that to haul. 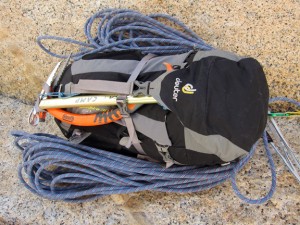 -Multi-day, Alpine Style-
It is on these overnight efforts that packs become necessary, and often very cumbersome. Many of the tips on this site are designed to help you go lighter on such climbs, and this is the first and more important step to having a more manageable pack. Once pared down your kit to the absolute essentials, you can find the ideal pack system.

Have a leader and follower pack. I like a leader’s pack of 30L (Speed Lite 30), and a follower’s pack of 40-45L (ACT Lite 45+10 SL). On the approach, pack denser items in the smaller pack in order to even out the loads for both climbers. On the climb, make the 30L leader’s pack should be light and manageable.

-Customizing your pack-
I find that almost every commercially available “climbing” pack come stocked with many unnecessary straps and features. Packs should be very simple and streamlines, with sufficient capacity for your kit and no extra weight. So, look for packs with removable features. Or, if features aren’t easily removable, get out a knife. For starters, I would remove the waist belt, which you won’t want to climb with, anyways. If possible, remove the lid (brain) section. On some packs, the lid is essential for closing the pack properly, but look for packs with a tight drawcord closure, and a single strap over the top. 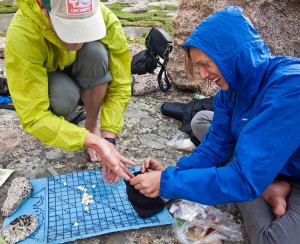 You might also want to remove some of the accessory straps, but I do find some to be useful. You can use exterior straps to attach crampons, ropes, jackets, and ice tools, so make sure to leave a few.
Remove all of the frame and padding from the back panel of the pack. Then, cut an appropriately sized piece of bivy-mat foam and fit it inside the pack. It can be a single layer, folded over, or even formed into a tube to line the entire pack (useful when hauling). Now you’ve got a comfy pack and a comfy bivy! Bonus Points: use a permanent maker to turn your custom bivy pad into a gameboard! If you’re looking at spending a long time in base camp, bring little game pieces, and you’re ready to go. I like scrabble, but I’ve also seen chess, go, and checkers.

-Place denser items low in the pack, and closer in to your back. The pack will of course change your center of balance, but by compressing the majority of the mass close to your body, that effect will be minimized.

-Take care when packing to create a comfortable back panel, since your lightweight pack will have little or no padding. Nothing is worse than tightly packing everything, putting it on, and then finding a rouge cam or whatever jutting into your back.

-Attach lighter items, such as helmets and jackets, to the outside.

-You most likely won’t have room for the rope inside the pack while approaching, so coil it in a long butterfly coil and lay it over the top of the pack, strapping it down along the side. Aim for as little wiggle room as possible, you don’t want it swinging around or snagging on trees.

-Fill any empty spaces inside hollow items, such as your boots and Jetboil, with small items, like gloves, socks, food bars, etc.

-Leave a few slings and biners outside the pack, and then use them to redundantly secure any item that might be riding on the outside of the pack, such as crampons, helmet, ice tools, etc.

-Try to align the ice axes/tools vertically along the center of the pack. Tuck the upper end (the spike) under the lids, so that they don't catch on the rock as you climb. Also in this photo, not the use of the pack as a mini-ledge on which to stack the rope, and the use of the small blue cord to redundantly attach the tools to the pack.

-You’ll often have to attach ice tools to the outside of your pack while climbing, and this can be a real pain. The spikes (bottom) of the tools will point upwards, and will catch frequently on the rock as you climb. So, try to align the tools straight up the middle of the pack, rather that off to one side. If possible, and (you haven’t already cut if off) tuck the spikes of the tools under the lid of the pack.

-While at a hanging belay, clip your pack to the anchor (ideally to a piece off to the side), and use it as a ledge on which to stack your rope.

-By the time you bother to get out your headlamp, it’ll probably already be dark, so make sure to pack it where you can easily find it by feel. Also, make sure your headlamp won’t turn itself on while in the pack, draining all your batteries. Some headlamps, like the BD Storm, have a locking feature, and on others you might want to remove the batteries.

–Scott Bennett (Outdoor Ambassador). Get more tips from Scott on his blog, Rope and Summit.

Get the right Pack for your next adventure!

Spring and summer – bring on the climbing season! Deuter, while known for the Guide Series of...
Read More

We test out packs constantly, find aspects that can be enhanced or bettered then take those ideas...
Read More