Chambers Canyon, Robbers Roost, UT: Surrounding the Moab desert are hundreds of canyons carved out over time by all of the intense elements that form the area (erosion from massive thunderstorms).  Some of these canyons are wide (Colorado river) and some are narrow… very narrow, like Chambers Canyon. 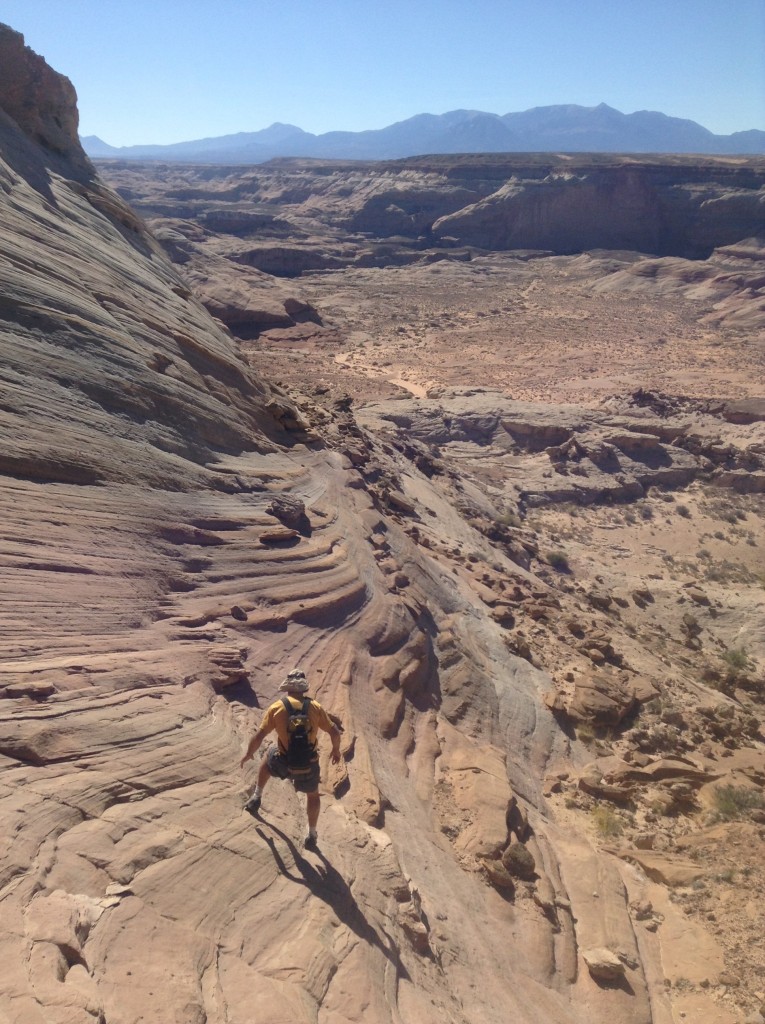 Last fall I entered Chambers Canyon in the Robbers Roost area near Hanksville, UT.  Chambers Canyon is the most intense slot canyon I have ever been in to date.  There were spots where my chest actually got stuck, but I made it through.  The narrowest sections are between 10-12" in width. After driving down a dirt road leading past remote desert buttes, vast landscapes and the occasional rabbit trying to it's best to be roadkill, we were there, way out there.

In the true technical slot canyons around the world it is impossible to wear a backpack and descend the canyon in many sections.  The technique that I use is to clip my Deuter Speedlite 20 to my daisy chain, below my feet giving me freedom to move.

The only items we could bring into the canyons were small packs, clothing that was going to get destroyed, footwear and pads (elbow and knee).  We had to wear harnesses only to carry our gear through the canyon. This was a dry canyon and my go to pack is the Deuter Speedlite 20, the perfect size to fit water, a layer and possibly a camera in a case.  I carry a bladder in the pack, the Deuter Streamer.  It's beyond important that the bite valve has a lock off valve, which the Steamer does. 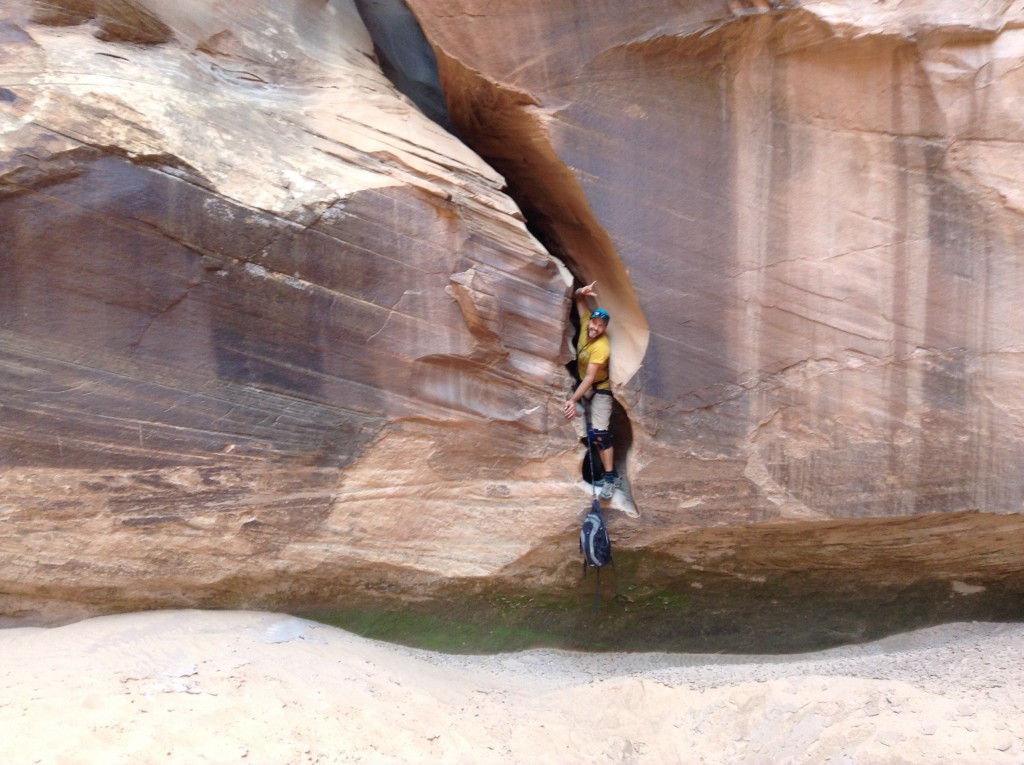 Soon after entering the mouth of the canyon it became narrow and dark, tight enough right away to squeeze my chest.  My buddy was in front of me disappearing around corners as I worked hard to keep moving.  We started later in the day and wanted to get through and back to the car before dark, so moving quickly was essential.

I was above the floor of the canyon about 20' where it was wide enough to move, dropping lower or gaining depending on how wide the path was.  The canyon walls up high where I could fit were covered with knobby teeth that would grab, below me the walls were smoother and resembled Antelope Canyon. My clothing, skin and mind were taking a beating and I was loving it, always working on putting the puzzle together. 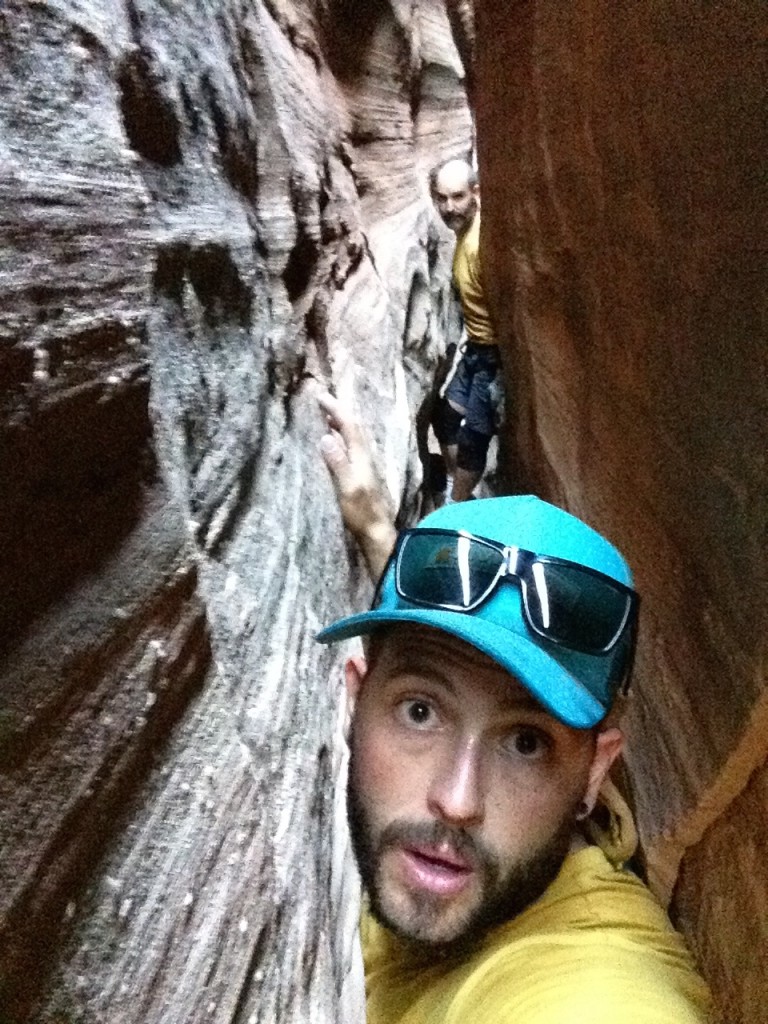 It's amazing how much you can sweat on such a cool day. I used many different chimney climbing techniques to move along until we entered the Chambers section.  The canyon widened with these large rooms with light falling to the bottom of the canyon, lighting up the intricate walls.  The crux (most difficult section) was just around the bend. 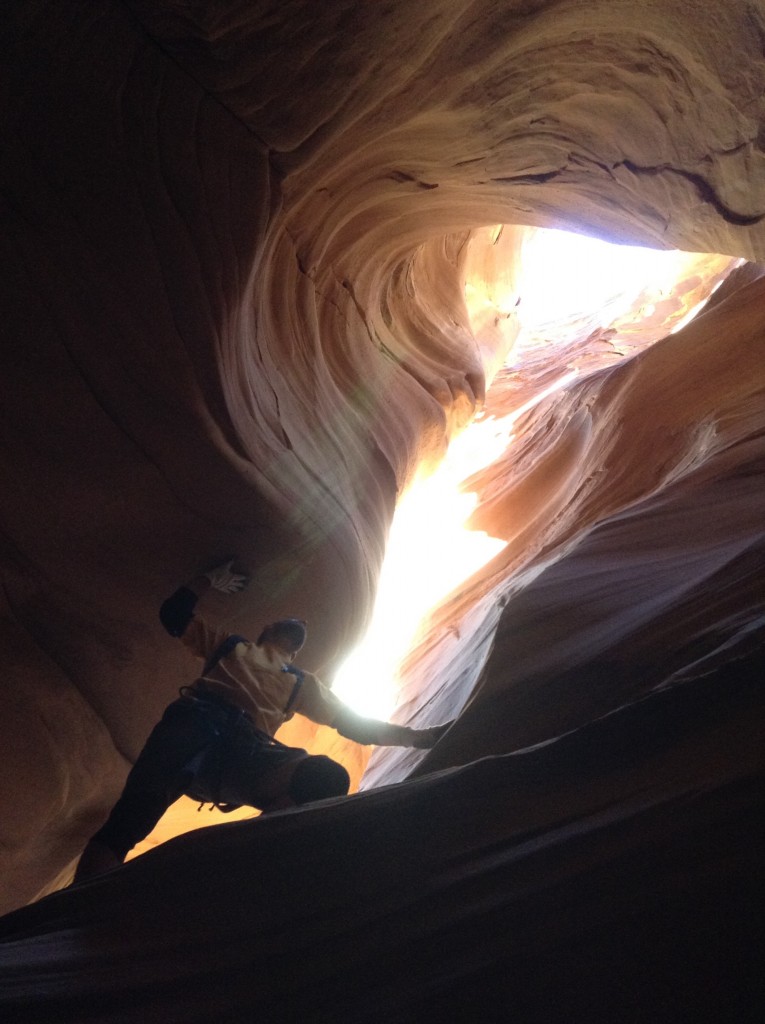 Rated 5.9 in the climbing realm, this was almost cruiser after what we had been moving through.  After about 3 hours of charging through we made it to the exit, which was different than most slot canyons exits.  The canyon exited six feet from the floor and involved some down climbing.  Only an hour back to the car and to a cold brew.  It was a good day.

A Hiking We Will Go: Keeping Up with Dad While Awaiting Winter

For the first time ever I am enjoying warm weather during the heart of winter. Most years I have...
Read More

You can never be sure how much you'll see of the fall season in Colorado. Sometimes it seems like...
Read More

A Month Of Highlining In Remote Tasmania

Tasmania is an island off the coast of Australia that is often overlooked because it is remote and...
Read More