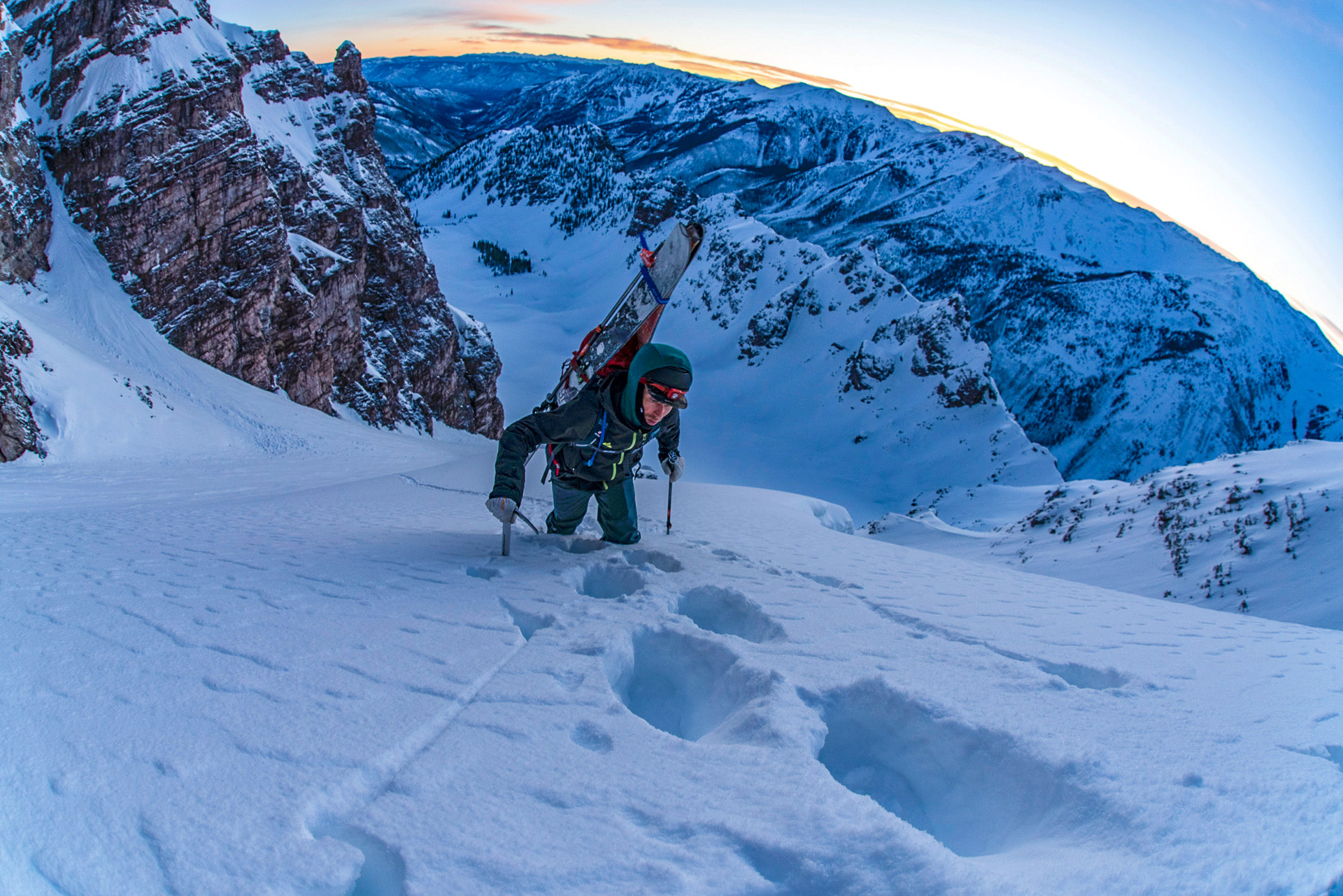 Published by Whit Boucher on Jun 6, 2019 4:00:00 PM
As I looked over the edge of the cliff, a sinking feeling in my stomach and a wave of anger came over me. We went up the wrong way. I studied the possibility of a down climb or traverse across a crumbly rocky cliff face with serious consequences if you fell, and considered making the dangerous move. I placed my ice axe on the red rocks and immediately pulled out a large flat rock and watched it tumble down and flop in the snow, making a big powder poooof where we needed to be booting up. “Did I really just do this?!” I kept asking myself over and over again. I had hiked a good distance above my partner, Ian, and was embarrassed to tell him I just led us up the wrong couloir, but we were stuck with no great way to get down other than transition back to skis and shred awesome pow back to the bottom of the couloir. Once Ian got a little closer I told him the news. We were at a dead end and had to ski back down 1,000 feet. I felt bad because this was Ian’s first big ski outing of the year due to meniscus surgery and I knew he was tired. But, he took the news well being the team player and the ultimate good sport he is and we transitioned back to our skis and ended up skiing an incredible powder filled couloir. I didn’t feel that bad about the decision to turn around as I skied down, pow flying in my face and uncontrollable hooting and hollering coming out of my mouth.

Once we go to the bottom of the couloir we could see another group with the same objective quickly approaching. With aspirations of first tracks down the infamous Landry, Ian and I quickly transitioned back to crampons and started booting up the correct couloir en route to the top of arguably one of the most bad-ass peaks in the state of Colorado: Pyramid. I huffed and puffed my way up, breaking trail again. I looked down behind me and the other group was gaining on us. Breaking trail is slow and I was starting to feel fatigued. It wasn't long before they were right on our tail. Luckily, it turned out to be friends, Greg Strokes, the Oakley team manager for the past 20-plus years, and Neal Beidleman, an extremely accomplished mountaineer who's resume consists of several 8,000-meter peaks in the Himalaya. It turned out much better than I could have imagined — we were a strong group of four friends having a good day in the mountains with the desire of racing to the top to get first tracks. 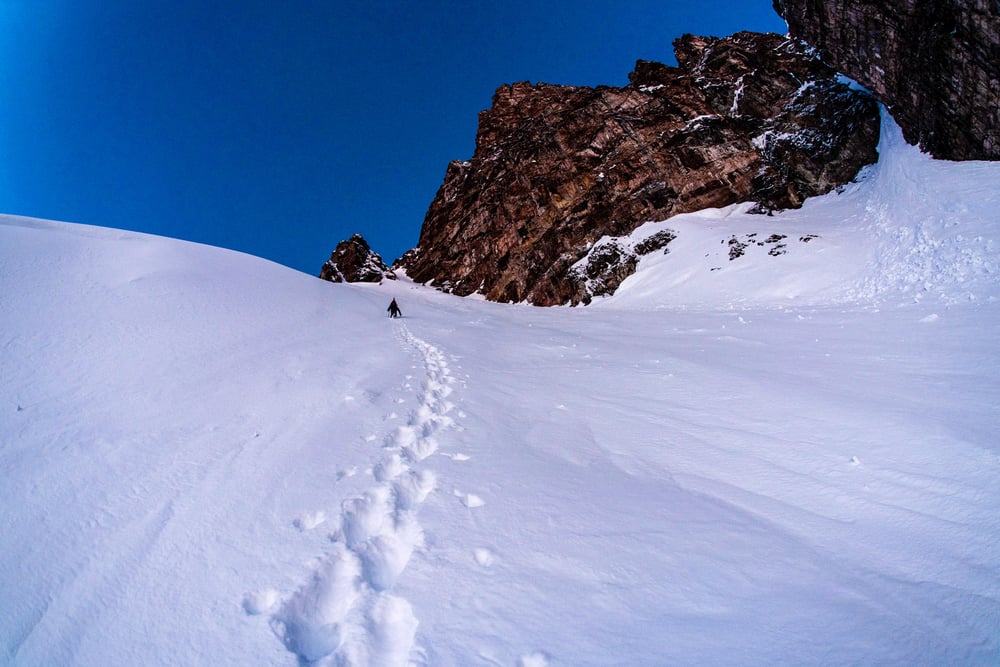 As the four us ascended to the top we chatted about our line and how great the conditions were about to be. The Landry is unique in that it stares you right in the face for the second half of the climb. It’s easy to get sucked into a trance, fantasizing about where you're going to lay down that perfect turn. The top of the line is the steepest part and has fatal consequences if you make a mistake and at that point in the hike. You have a staggering view of the west face that drops straight down, 4,000 feet to the valley below. It’s equally beautiful as it is puckering to be hanging on the ridge almost to the top above the Elks. The final push to the top is essentially vertical and feels like going up a ladder. Greg set the track for most of the second half of the hike and decided to take a non-traditional route to top-out that if I were to climb again, I don’t know if I would've gone that same way. The snow was sugary and the rocks below were loose and just waiting to be pulled out of the mountain. Trying to get good purchase was a challenge and definitely made you think about the fact that if you blow it, it’s a really, really long way down.


Immediately as we topped out, all of that tension and lactic acid build up in my legs and arms seemed to instantly vanish and a wave of newfound energy and excitement rushed through my entire body. We were about to shred the Landry in prime conditions! 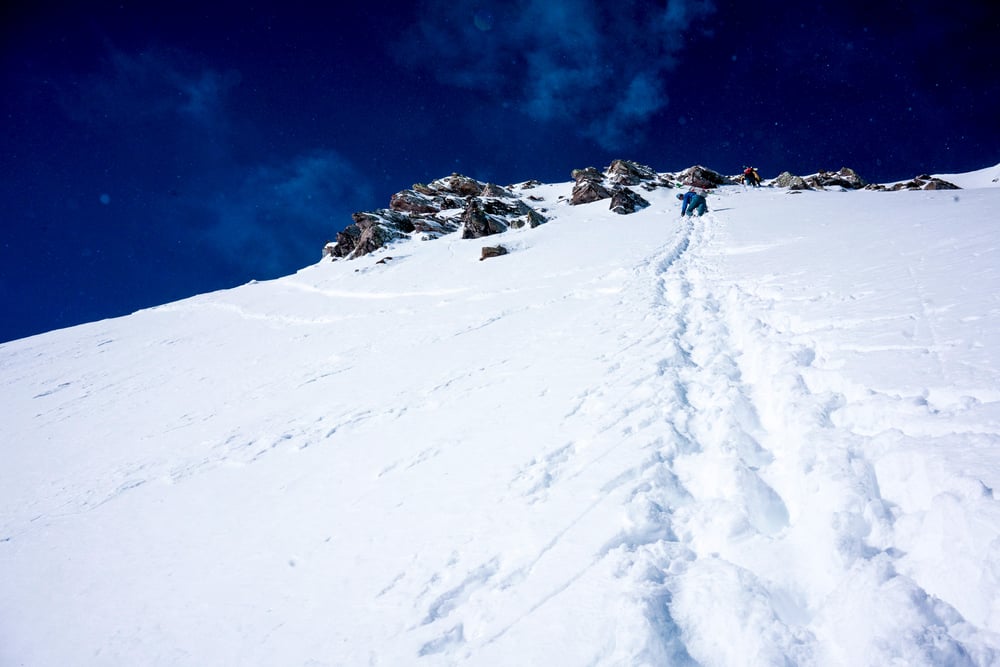 After the obligatory photo session on top, we geared up, got our skis on and proceeded down to the main pitch. To get down to the main face of the Landry you have to go around the first top buttress which entails a few turns over pretty significant exposure. I let Neal lead the way, being vastly more experienced than me in the mountains. He made calm, very casual hop turns till he was out of sight, making it look like a standard run on Ozone in the Highland Bowl. Except it’s definitely not. My turn. As I pushed off I experienced calmness and comfort being back on my skis, this is what I am used to. A couple jumps turns, some good slough and I was down by Neal’s side standing atop the meat of the Landry. It’s truly a sight to behold — a wide, 50 degree sustained pitch for about 1,000 feet. Beautiful. 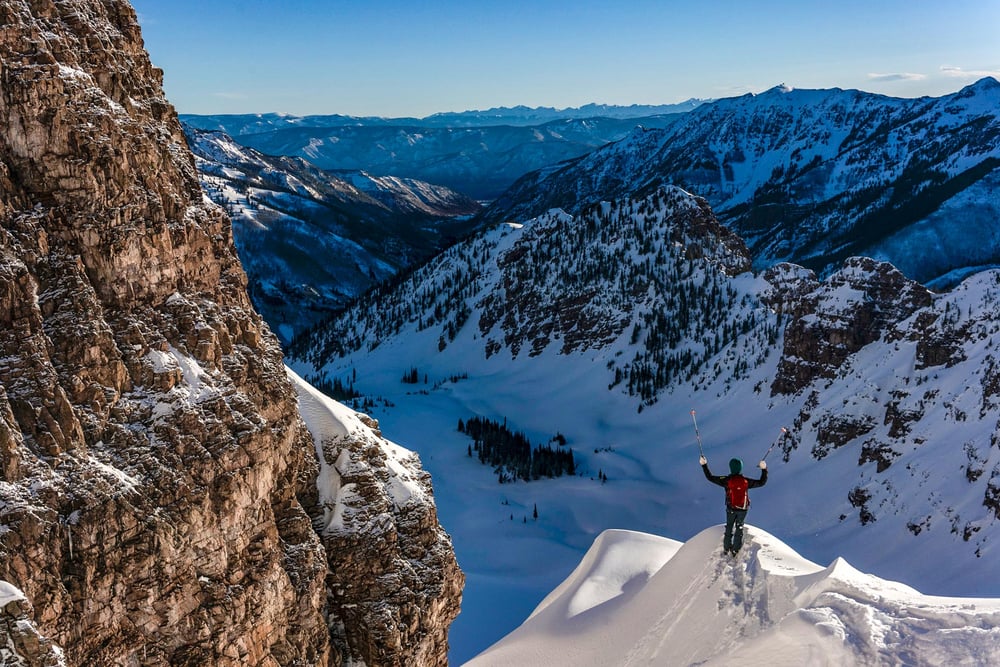 Once Ian and Greg made it around the corner I had the chance to set the first track down. I tipped in and let my skis run. It felt incredible. So smooth and easy, almost too easy for where you are. After about 20 high speed turns I peeled left to a safe spot and waited for the others to come down, adrenaline coursing through my body.

The rest of the way down was a blur. Still so incredibly hyped on what we had just skied, it was hard to focus and take it all in. Once we finally got down through the spring mank to the river in the valley below, my previous emotions of anger about getting lost and going on an extra 1,000-foot pow excursion turned into a funny joke and laughs. I guess it’s easy to forget about the little hardships when everything aligns in the end.
Tags: Backcountry skiing, Colorado, skiing
Back to Blog

Will This Winter Ever End?