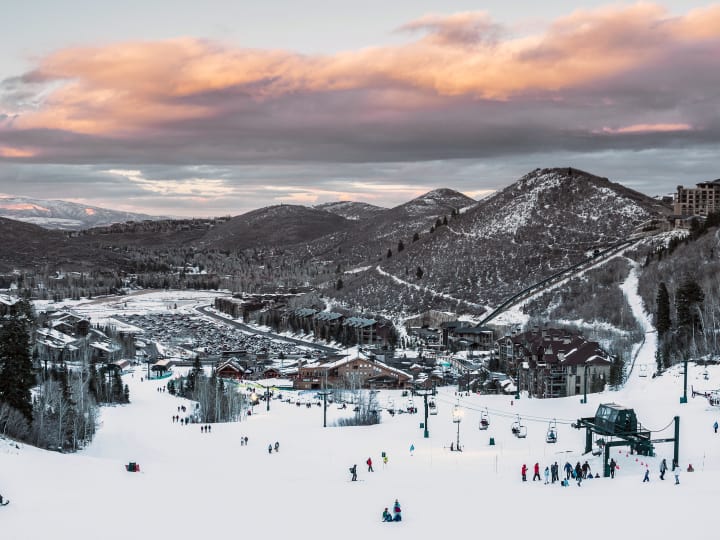 10 Eco-Friendly Ski Resorts That are Leading the Way for Sustainability in the U.S.

Deer Valley is just one of many surprisingly eco-friendly ski resorts across the country.

“Sustainable” and “ski areas” are traditionally not things associated with one another. However, since climate change has reached a tipping point, many outdoors enthusiasts have become more concerned about preserving the natural places they recreate. And since ski areas’ financial futures depend on having solid snow pack, they’re increasingly adopting eco-friendly attitudes. The National Ski Areas Association has helped pioneer the effort, launching its sustainable slopes program in 2000 by outlining ideal environmental standards for ski areas. In 2012, it issued a climate challenge, asking ski areas to reduce greenhouse gas emissions.

And the 2018-19 season is shaping up to be its most ambitious yet, with more than 40 ski areas taking on the challenge. Some are upping their efforts beyond reducing carbon emissions, ramping up programs and initiatives that focus on recycling and reducing water use, as well as partnering with conservation groups. Many of these efforts are virtually invisible to skiers, so visitors still have a seamless experience on the slopes and in the lodges. Here are 10 ski areas excelling in sustainability.

Taking up the NSAA’s climate challenge, the Alta Environmental Center is guiding efforts to reduce the ski area’s greenhouse gas emissions by 20 percent by 2020. It’s replanting Douglas fir to cover the installation of new lifts, installing a solar array, and encouraging ecological education initiatives across the mountain. The ski is diverting food waste from landfills—to the tune of some 10 tons this season—via the Wasatch Resource Recovery program, and is adding to that effort by removing all paper take-away contains from the Buckhorn Kitchen and providing reusable containers instead. And it’s hitching a ride on Snowbird’s RIDE app, which connects skiers with others looking to carpool.

The Aspen Skiing Company, which is behind the ever-popular Aspen Snowmass Resort, has been leading the charge in sustainability efforts since 1997, when it established the Environment Foundation. The partially employee-funded foundation (half of their employees donate a few bucks per paycheck, which the Aspen Community Foundation and Aspen Skiing Company Family Fund then match) has granted $3.3 million to many area conservation non-profits. But the ski area isn’t just in the business of paying it forward. In 2004, it installed a first-in-industry solar array, and it’s also invested in alternative energy by building the Elk Creek Coal Mine Methane Plant, which captures waste methane vented from the coal mine to generate clean electricity. Resort reps are constant fixtures in Washington, D.C., to lobby for climate legislation, and it’s also asking customers to join in advocacy efforts with the newly launched Give a Flake campaign, which harnesses the power of social media to call for legislators to protect the planet.

Like many ski areas, Deer Valley Resort offers staff and visitor shuttles to cut back on carbon emissions from driving around the ski area. However, it goes far beyond that with several other initiatives. The resort reduces its energy use through LED lighting and high-efficiency snowmaking guns. It composts food waste through Wild Harvest Farm, out of Peoa, Utah; since beginning the program in May 2018, they’ve diverted 63,275 pounds of food from the landfill. In addition to compostable take-out containers and a recycling program, the resort is hopping on the anti-straw bandwagon and going straw free. (Paper straws will still be available at guests’ requests.)

This ski area isn’t just hopping on the bunny slopes of sustainability: Environmental stewardship has been part of its ethos since its founding in 1969, backed by movie star founder Robert Redford’s longstanding commitment to preservation and conservation. With that in mind, conservation easements are Sundance’s bedrock. The Sundance Preserve has protective covenants covering 3,343 acres of land, which pairs with the Redford Family Nature and Wildlife Preserve, adding another 860 acres of protected land. Beyond that, Sundance purchases renewable energy credit to offset all of its energy use; other initiatives include low VOC paint, a robust recycling program, all-natural cleaning products, and eco-friendly amenities like shampoo. The resort also blends its environmental and artistic pursuits with a unique glass recycling program. Because glass recycling in Utah is challenging, the glass from its farm-to-table restaurant (think: wine bottles) are taken to its glass works kiln where the glass is turned into a decorative piece of art or housewares to be used in the restaurant again.

Taos Ski Valley made headlines as the first ski area in the world (and only, at the time of this writing) to achieve B Corp certification. That designation may seem like legalese, but it recognizes the ski area’s environmental stewardship and accountability. Taos Ski Valley’s newest hotel, The Blake, earned LEED Certification, an acknowledgment of its sustainability bona fides from energy efficiency to water bottle filling stations that cut single-use plastics mountain-wide. The hotel restaurant has a unique recycling program: wine bottles are donated to Earthship Biotecture, a local green building company for use in their sustainable buildings. With the launch of the ski area’s new airline, TaosAir, its investing in a carbon offset program to neutralize the impact of jet travel. It has also restored the Rio Hondo riverfront within the valley and partnered with The Nature Conservancy on broader conservation efforts.

As of early December 2018, Squaw Valley Alpine Meadows will be on 100 percent renewable energy. With that change, the ski area anticipates reducing its total annual carbon footprint by half. It’s upping the ante by quadrupling the size of its existing “Protect Our Winters” parking area (aka premium parking for those who carpool) to encourage more drivers to travel together. It’s also transitioning to stone paper trail maps. What difference can that make? The ski area anticipates these waterproof and tear-resistant maps will last longer, saving 170 trees and 136,000 gallons of water.

One of the top ski areas in North America, Grand Targhee has installed energy-saving LED fixtures and taken eco-friendly measures in its lodge with bathroom sensor lights, low-flow toilets, and recycling measures—that latter to the tune of some 25 tons a year. Its employee-funded (and matched) foundation has awarded $94,000 in grants to environmental projects in the last decade.

This cozy resort engages in wildlife and habitat protection, tracking the Bicknell’s thrush and black bear to ensure they have ample habitat and corridors. In 1999, Smugglers Notch integrated “The Living Machine” to enhance its wastewater treatment (the machine uses biological processes and cut out the need for chemicals). It also uses energy efficient appliances within the resort communities and offers curb-side pick-up for recycling throughout the development.

This relatively small mountain aims high with its eco-friendly measures. It was the first ski area in North America to install a wind turbine, named Zephyr, which provides between a third and half of the resort’s electrical needs. By partnering on a solar array starting in 2015, Jiminy Peak expended its renewable energy use.

In addition to initiatives like promoting ride-sharing, Snowbird reduces carbon footprint by exploring alternative fuel options for its snow cats and providing electric vehicle charging stations for guests. It became an idle-free resort in 2016, which decreases carbon emissions and helps keep those bluebird skies blue. Its co-generation power facility produces half of the resort’s power, and exhaust from that plant is converted to steam and piped through the resort to heat The Cliff Lodge’s rooms, pools, restaurants, and meeting spaces.

Heading to the slopes this season? Don't forget a ski pack! Deuter packs are environmentally friendly, PFC-free and guarantee a comfortable fit.

Written by Ashley M. Biggers for Matcha in partnership with RootsRated and legally licensed through the Matcha publisher network. Please direct all licensing questions to legal@getmatcha.com.

Getting The Right Gear For The Tahoe Backcountry

It's no secret that the Lake Tahoe backcountry is an outdoor recreation paradise. Pretty much any...
Read More

Come for the skiing, stay for the mountains

One of the best things about living in a ski town is that having fun in the mountains doesn’t end...
Read More